To brace or fluidize: It’s in the loading rate! 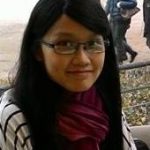 Notably, cells undergo fluidization when stretched at high amplitudes or rates (Krishnan et al., 2009; Nava et al., 2020; Peyret et al., 2019; Trepat et al., 2007). This process involves a drastic change in the stiffness of cells and disintegration of the cell cytoskeleton (Chen et al., 2010; Krishnan et al., 2009). While we are beginning to understand the effects of static force magnitudes on cellular mechanosensing, the effects of loading rate (i.e. the rate at which force is applied) on cells remain unclear. In this new preprint, Andreu et al. sought to investigate the contribution of loading rate on cellular mechanosensing by using a myriad of tools such as substrate stretching, optical tweezers, atomic force microscopy, a computational clutch model as well as an in vivo differential rat lung ventilation model.

To investigate the effects of loading rate on cellular mechanosensing, the authors first seeded mouse embryonic fibroblasts on soft fibronectin-coated polyacrylamide substrates (0.6 kPa). Under this condition, cells displayed small punctate paxillin-containing adhesions, a largely cytosolic population of YAP, and fast actin retrograde flow (~50nm/s). Since the loading rate is derived from deformation speed and substrate stiffness, two strategies were employed to increase loading rate. In the first strategy, cells were seeded on substrates with increased stiffness (3.4 kPa). This activated cellular mechanosensing as evidenced by YAP nuclear translocation. In the second strategy, loading rate was directly increased by stretching cells seeded on soft substrates (0.6 kPa). In this approach, cells were first subjected to a mild 2.5% biaxial cyclic stretch in a progressive triangular wave at a frequency of 0.125Hz for 1h. Cellular mechanosensing was not activated as paxillin-containing adhesions remained small and YAP was mainly cytosolic. However, when the stretch frequency was increased to 1 and 2Hz while maintaining a constant stretch amplitude, YAP translocated to the nucleus and paxillin-containing adhesions grew into larger focal adhesions. These experiments show that increasing loading rate can activate cellular mechanosensing. 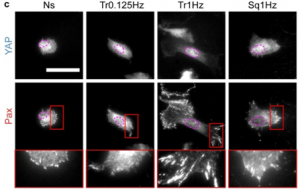 Figure 1. Immunofluorescence staining of YAP and paxillin in mouse embryonic fibroblasts that are not stretched (Ns), stretched at 10% using triangular (Tr) and square (Sq) signals at different frequencies. Adapted from Figure 1C from Andreu et al. 2020.

Next, the authors applied different stretch amplitudes ranging from 2.5% to 20%. Concurring with their previous observations, increasing stretch amplitudes at most frequencies activated cellular mechanosensing. Strikingly, for stretch amplitudes above 5% and stretch frequencies above 1Hz, cells fail to display adhesion growth and YAP nuclear localization. These observations led the authors to hypothesize that the cells could have fluidized due to cytoskeletal network disruptions at such high stretch rates. To test this hypothesis, cells were stretched at different rates and actin organization was quantified. At very low and high rates, actin was largely disorganized. However, when cells were stretched using a condition that activated cellular mechanosensing (10% stretch, 1Hz triangular wave), actin fibers were organized with enhanced actin anisotropy. To further confirm the role of cytoskeletal fluidization, the authors were able to inhibit fluidization and restore cellular mechanosensing at high stretch rates by treating cells with an actin-stabilizing drug, Jasplakinolide.

To explore the interplay between loading rate, mechanosensing, and fluidization, the authors developed a computational clutch model. By modifying only stretch frequency and amplitude, the model largely concurred with the experimental observations. This indicates that depending on the magnitude of the loading rate, cells can either mechanosense or fluidize. To further confirm this hypothesis, the authors proceeded to test the assumptions in their model. Firstly, loading rate and not cell deformation rate should be responsible for triggering mechanosensing or fluidization. Secondly, these effects are expected to occur at cellular and subcellular levels. To test if these assumptions hold, cells expressing GFP-paxillin were seeded on glass, and forces were applied by displacing an optical trap horizontally with triangular signals of the same amplitude but different frequencies. Gradually, bead displacement and speed were progressively reduced. Simultaneously, there was an increase in applied force, loading rates, effective stiffness of beads, and recruitment of paxillin to the beads. Remarkably, unlike the stretch experiments, there was no reduction in paxillin recruitment even at very high frequencies. The authors reasoned that the lack of fluidization could be due to 1) insufficient force applied by the optical tweezers on cells (optical tweezers can only apply forces <~100pN) and 2) since cells have adhered to the glass and optical tweezer experiments were performed on the lamellar region of cells which contains structured actin networks, the forces applied to the beads are probably well-distributed across the network, reducing the chances of fluidization. To overcome these limitations, the authors adopted a different strategy. They attached cells in suspension to a flat Atomic Force Microscope (AFM) cantilever, brought cells into contact with a fibronectin-coated glass, and pulled the cells at different speeds. With this approach, they observed an initial increase in cell stiffness which decreased sharply at pulling speeds of 5 and 6um/s- suggestive of fluidization.

Finally, to determine if the effects of loading rate on cellular mechanosensing can also be seen in vivo, the authors subjected each of the two lungs of a rat to independent mechanical ventilation frequencies. When the right and left lungs were ventilated at the same frequency, no significant differences in YAP localization were seen. However, when ventilation frequency was increased, nuclear YAP levels were also increased indicating that mechanosensing was activated.

I thoroughly enjoyed reading this preprint! The authors used multiple creative experimental approaches to address the longstanding question of whether loading rate affects cell mechanosensing. To see loading rate affecting mechanosensing in vivo is exciting as it gives relevant context on why this question is important. It is also nice to read about puzzling results and learn how the authors navigate the limitations of experimental techniques by thinking out-of-the-box.

The author has responded with the following additional information:

We have not observed it in rat lungs in our study, potentially because the range of accessible frequencies was not as wide as that in vitro. It is tempting to speculate that the fluidization regime may appear in fast-deforming structures in vivo, such as vocal cords (oscillating at the Khz range!). But this remains to be explored.

This is a highly relevant and very interesting question and we have a project in the lab looking exactly at that. We don’t yet have a clear answer, but I can tell you that indeed there seems to be a memory, and that it is likely regulated by nuclear deformation.