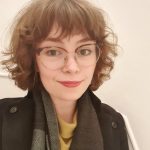 Intracellular Ca2+ signals regulate a vast array of cellular behaviours, including those associated with cell motility and cancer1,2. Cytosolic Ca2+ concentration is controlled by a number of transport proteins which facilitate the movement of Ca2+ across membranes in response to extracellular stimuli. These transport proteins include intracellular Ca2+-release channels such as the ubiquitously-expressed inositol 1,4,5-trisphosphate receptor (IP3R) present on the membrane of the endoplasmic reticulum (ER, the major intracellular Ca2+ store), and plasma membrane Ca2+-permeable channels such as the mechanosensitive Piezo. Importantly, tight control over the spatial and temporal dynamics of Ca2+ signals contributes to the selective activation of Ca2+-dependent proteins, and so to the specificity of downstream cellular processes3.

The formation of cell-cell contacts is one process thought to be regulated by intracellular Ca2+ signals, as well as being dependent on extracellular Ca2+. In epithelial tissue, cell-cell contacts are maintained by the transmembrane adhesion protein E-cadherin, which forms adherens junctions. Extracellularly, E-cadherin binds the E-cadherin of neighbouring cells, and intracellularly, binds a complex of proteins of the catenin family which are anchored to the actin cytoskeleton4. Loss of E-cadherin and disintegration of adherens junctions are associated with epithelial-to-mesenchymal transition (EMT), which is a hallmark of metastatic cancer5. However, there is a growing body of evidence to suggest that E-cadherin expression is actually required for invasiveness and metastasis6, possibly by promoting formation of invasive membrane protrusions7.

Recent work from the Kwon lab describes a neat model for cell invasion using Drosophila intestinal epithelial cells which are made to express an oncogenic mutant version of Ras, RasV12. These RasV12-expressing cells are tumorigenic and, most notably, disseminate from the epithelium by breaching the basal extracellular matrix (ECM) and visceral muscle of the Drosophila midgut. During dissemination, cells form actin- and cortactin-rich protrusions which enable invasion and subsequent migration into the circulatory system8. In this pre-print, Cabrera et al. examine the roles of E-cadherin and Ca2+ signals mediated by IP3R and Piezo in epithelial cell dissemination.

Ca2+ signalling by IP3R is needed to disassemble E-cadherin from adherens junctions
The authors propose that Ca2+ signals are responsible for E-cadherin remodelling, and attempt to disentangle the Ca2+ signalling pathways responsible for disassembly of adherens junctions and re-assembly at invasive protrusions. Ca2+ release from the ER via IP3Rs is triggered by the binding of IP3, a second messenger that is generated by phospholipase C (PLC) following stimulation of cell surface receptors. These Ca2+ signals often activate Ca2+/calmodulin-dependent protein kinase (CaMK), which phosphorylates downstream proteins. The authors find that knock-down of PLC, IP3R and CaMK reduces the number of cells escaping from the epithelium and prevents loss of β-catenin/E-cadherin at lateral adherens junctions, implicating this pathway in E-cadherin disassembly.

Ca2+ signalling by Piezo is needed for E-cadherin assembly
Piezo has previously been shown to be required for the function of invasive protrusions and migration by membrane blebbing in RasV12-expressing cells, possibly in response to changing mechanical cues in the local microenvironment. This may activate the Ca2+-dependent protease calpain, which is thought to upregulate matrix-metalloprotease 1 and thereby degrade the ECM8.  Here, the authors find that knock-down of both Piezo and calpain results in a cytosolic localisation of β-catenin/E-cadherin, suggesting that E-cadherin has been lost from adherens junctions but fails to re-assemble basally.

Finally, the authors use pharmacological means to manipulate intracellular Ca2+. They use ex vivo preparations of Drosophila midguts at an earlier stage of RasV12 expression before cells undergo dissemination. Generating a global cytosolic Ca2+ signal by treatment with thapsigargin appears to induce loss of β-catenin/E-cadherin from the lateral region of the RasV12-expressing cells, but blocking Ca2+ entry via Piezo with GdCl3 does not alter the localisation of already-assembled E-cadherin. When Piezo is blocked after thapsigargin-induced disassembly, there is less β-catenin/E-cadherin present basally, suggesting that Piezo is needed for E-cadherin assembly at basal regions of the cell. Interestingly, the authors note that knock-down or GdCl3-inhibition of Piezo also prevents the formation of adherens junctions at an earlier stage of RasV12 expression, suggesting a wider role for Piezo-mediated Ca2+ signals in E-cadherin assembly. 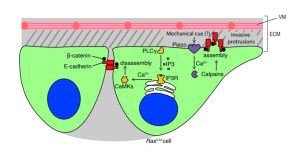 Why I liked this pre-print

This pre-print caught my attention as it highlights the interplay between Ca2+ signals from different sources influencing distinct but related cellular events, especially in circumstances where Ca2+ signalling may be dysregulated, such as in cancer. On that note, I liked that the in vivo model for cell invasion takes into account the extracellular context, especially mechanical cues that the cells may be exposed to, such as changes to the ECM. This model seems great for investigating less well-understood aspects of EMT and metastasis.