Background: Not all auxin responses can be explained by canonical auxin signalling

The plant hormone auxin is a master regulator of plant morphology as it controls cell proliferation, elongation and differentiation at many developmental stages from embryogenesis to senescence. Auxin perception has been thoroughly investigated for decades, which led to the discovery of what is now considered to be the canonical auxin signalling pathway (Fig. 1): In the absence of auxin, AUXIN/INDOLE-3-ACETIC ACID (Aux/IAA) repressor proteins, together with their co-repressor TOPLESS (TPL), inhibit the transcriptional regulatory function of AUXIN RESPONSE FACTORS (ARFs). Auxin promotes interaction of Aux/IAAs with F-box proteins of the TRANSPORT INHIBITOR RESPONSE 1 (TIR1)/AUXIN-BINDING F-BOX (AFB) family. These proteins are part of a ubiquitin ligase complex that ubiquitinates Aux/IAAs and thereby targets them for degradation in the 26S proteasome. This revokes repression of ARFs, which can in turn regulate auxin-responsive genes (Leyser, 2018). 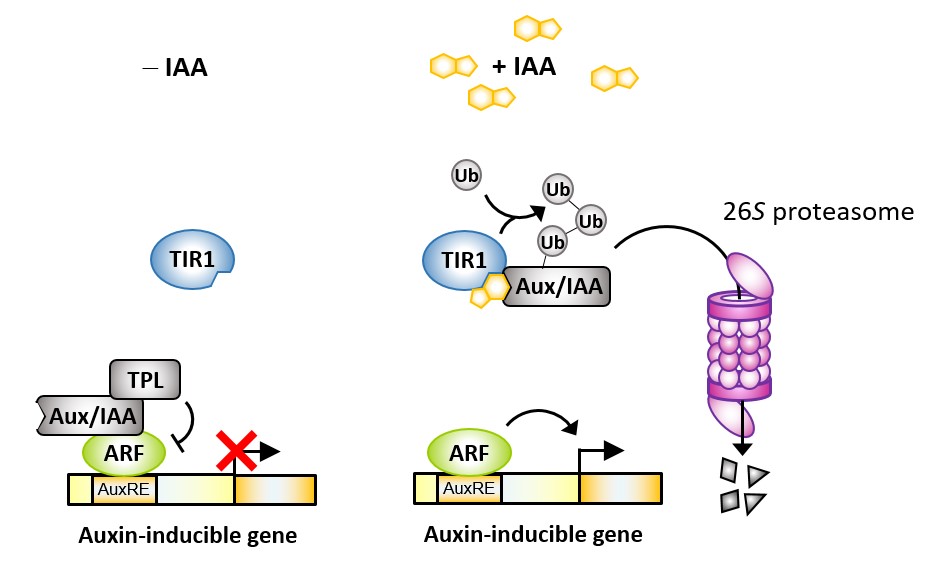 The nuclear TIR/AFB-Aux/IAA pathway however cannot account for all responses triggered by auxin, and several non-canonical signalling pathways have been identified (Kubeš and Napier, 2019). One of these centres around ETTIN (ETT)/ARF3, a repressive ARF that regulates flower development, lateral root formation and leaf polarity in Arabidopsis. ARF3 is an atypical ARF that does not possess an interaction domain for Aux/IAA repressors, and therefore is not regulated by the canonical pathway. Instead, auxin disrupts the interaction between ETT and other transcription factors such as INDEHISCENT (IND) and thereby interferes with ETT’s repressive activity (Simonini et al., 2016). Whether this effect of auxin on ARF3 is direct is however unknown. In their preprint, Kuhn et al. set out to answer this question and to further analyse the consequences of auxin sensing by ETT.

In addition to its DNA binding domain and the disordered ES domain, ETT contains a conserved EAR motif, which is also found in Aux/IAA proteins, where it mediates interaction with the TPL co-repressor. Yeast-2-hybrid and co-immunoprecipitation experiments revealed that ETT interacts with TPL and the related TOPLESS-RELATED 2 (TPR2) and TPR4, and that this interaction requires the EAR motif. IAA had previously been shown to disrupt interactions between ETT and other transcriptional regulators, and this also proved to be the case for ETT’s interaction with TPL/TPRs.

TPL is known to recruit HISTONE DEACETYLASE 19 (HDA19), which keeps chromatin in a repressed state. The authors found that both tpl tpr2 and hda19 mutants show strong defects in gynoecium development (i.e. aberrant formation of “female” flower organs), similar to ett mutants. Expression of two established ETT target genes, PINOID (PID) and HECATE 1 (HEC1), is elevated in gynoecia not only in ett, but also in tpl tpr2 and hda19 mutants. Using chromatin immunoprecipitation (ChIP), the authors demonstrated that ETT, TPL and HDA19 associate with the same regions of the PID and HEC1 promoters, and H3K27 acetylation at these loci increases upon IAA treatment and in an ett mutant background.

Kuhn et al. suggest a model in which ETT recruits TPL/TPR and HDA19 to its target genes, where HDA19-induced histone deacetylation keeps chromatin in a repressed state. Direct binding of IAA to ETT causes dissociation of TPL/TPR-HDA19, allowing histone acetylation to occur and the respective genes to be expressed (Fig. 2). 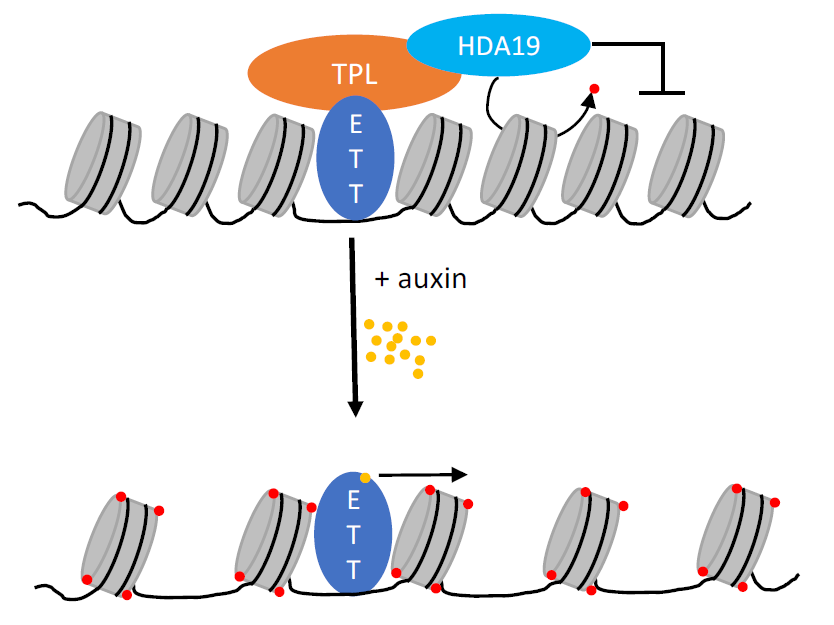 This preprint provides exciting insight into the mechanisms of a previously somewhat obscure auxin signalling pathway. It seems the auxin field is well underway to establish ETT as a non-canonical auxin receptor alongside the canonical TIR/AFB-Aux/IAA pathway.