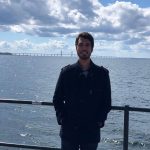 During germination, plants develop a structure called the apical hook in order to protect the shoot apical meristem, which will give rise to the aerial plant tissues, from soil emergence-related damage. Several genes from the canonical auxin signaling pathway are thought to be important for apical hook formation, however their real contribution under natural conditions has not been investigated.

Baral et al., demonstrate that, in soil-grown plants, apical hook development does not rely on the canonical, ARF7/ARF19-mediated auxin signaling but rather on TMK receptor-mediated auxin signaling. This finding leads the authors to also show the importance of cellulose microfibrils for apical hook formation, and the hidden role of cellulose for the correct subcellular localization of the PIN proteins.

In the image to the left, we can observe that  in vitro-grown mutant plants lacking KATANIN are not able to form an apical hook during germination, as previously described. In the image to the right, however, we surprisingly see that if we grow the same mutant inside the agar medium, mimicking the soil mechanical resistance, they form an apical hook. 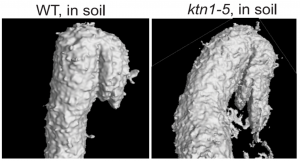 This is confirmed when growing ktn1-5 mutants in soil, as attested by X-ray microcomputed
tomography.

In this study, the authors compare the apical hook development of a series of mutants grown either in classical laboratory conditions, or grown inside the agar, which mimics the soil plants would normally encounter during germination. They are able to prove that, indeed, growing plants inside the agar is an effective method to replicate soil properties. Interestingly, they find that the mechanical constraint of the agar can be enough to complement the kat1-5 knockout mutant for KATANIN, which is usually unable to form an apical hook when grown on plates. This unexpected result prompted the authors to question whether, such as KATANIN, other proteins considered to be essential for apical hook development are so outside of the lab. Using genetics, they elegantly show that, in soil-grown plants, the TMK receptors mediate the correct asymmetric auxin maxima distribution between the concave and convex side of the hypocotyl required for apical hook development. In addition, they clearly demonstrate that correct cellulose microfibril deposition is also necessary and raise the question of whether TMK-mediated signaling might influence cellulose dynamics.

I chose this paper because it addresses the possible bias that the experimental setup might introduce when trying to understand a biological process. Nowadays, when we have the tools to better imitate the natural plant environment, many groups still turn a blind eye to the fact that their results might not have a real significance because of the artificial growing conditions. I feel that the authors set an example with this article.

The authors make the surprising finding that many of the proteins we thought until now to be indispensable for apical hook development are actually dispensable for soil-grown plants. Among these proteins are KATANIN, ARF7 and 19 and auxin influx carriers AUX1, LAX1, 2 and 3. These results evidence the fact that surely many genes or proteins we believe to be essential for certain biological processes are only so for laboratory conditions and not for the natural environment.

I would like to thank the authors for answering the questions and engaging in the discussion.

1.The authors demonstrate that the TMK receptors are required for proper apical hook development in soil-like grown plants. It is therefore tempting to speculate that the double mutant iaa32/iaa34 would also be impaired in apical hook formation. Have the authors verified if that is the case?

We thought about the control experiments for example about the IAA32/34. But since the paper is under review we would refrain from answering questions on that now.

2.The authors show that the localization of PIN1, 3 and 4 proteins is affected in the cellulose mutants any1 and pom2-8. However, the degree of mislocalization is different for each one. Can the authors explain why each PIN protein would react differently to cellulose defects?

About the PIN polarities, its a good demonstration how fascinating cellular polarity mechanisms are. Even if we keep the cellulose mutants aside, in WT plants different PIN proteins show remarkably different localization patterns (across different cells and sometimes in the same cell). Even after decades of research, we know very little how such polarities are established. It can be polarized secretion, restricted diffusion or it can be selective endocytosis- we simply do not know yet. Our results show that even a common factor (cellulose) can affect the PINs differently, which further highlights how unique and varied the individual polarity mechanisms are and we hope it will encourage cell biologists to dig deeper.

3.Can the authors give some examples of other plant developmental processes for which we might be introducing a bias with the experimental setup?

About other processes where real-life conditions are under-appreciated: something that intrigues me is the recent erratic nature of our climates. Temperature variabilty in any season has increased and weathers are becoming unpredictable. Most of the studies that asses the effect if climatic conditions on plant processes (flowering / dormancy for example) use strictly regulated temperature regimes. Does the erratic short term variations have any effect on plant processes? – we do not know yet. Perhaps subjecting WT and mutant plants to more  realistic climatic conditions will be more revealing on how plants will adapt to climate change and how robust plant processes are.