What separates leaders from followers? Marwaha and colleagues reveal an unexpected role of lysosomes in leader cells during collective cell migration in their new study. 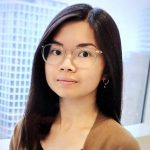 Processes such as wound healing and organogenesis are critically dependent on the organised motion of cell clusters, termed collective cell migration1. During migration, a few cells at the outermost margin transform into leader cells with actin-rich lamellipodia1, 2. Leader cells are responsible for guiding followers to distant sites1, 2. The importance of leader cells in successful tissue development and wound healing is clear, but how do leaders emerge from a seemingly homogeneous mass of cells?

Previous studies have identified signaling proteins such as p53, Rho GTPases, and p120 catenin as markers of leader cells that distinguish them from followers3-6. Beyond these biochemical signatures, physical forces arising from cell-cell or cell-substrate interactions experienced by collectively moving cells appear to be influential in the acquisition of leader cell identity7, 8. However, how these diverse cues are integrated to promote leaders from followers remains to be solved.

Prior studies have emphasized the importance of dynamic rearrangements of the actin cytoskeleton during the adoption of leader cell identity7, 8. In contrast, relatively little attention has been paid to how cellular organelles are reorganized in leader cells. Aside from their established role in breaking down macromolecules, lysosomes have emerged as key players in cell motility. Studies suggest that spatial reorganization of lysosomes underlies migration of single fibroblasts and dendritic cells5, 9, but their role in collective migration is unknown.

Using a combination of live-cell imaging, optogenetics, and micropatterning, the authors uncovered a novel role of lysosomes in leader cells during collective cell migration. In epithelial monolayers and Drosophila embryos, they demonstrate that lysosomes amass at the cell periphery in cells located at the migrating front. This peripheral relocalization occurs before development of lamellipodia and blocking lysosomal relocalization disrupts leader cell emergence. Overall, the authors present a surprising role of lysosomes as integrators of biochemical and physical cues in leader cells.

To visualize lysosomes during collective cell migration, the authors grew MDCK or EpH4 epithelial cells to confluence inside migration chambers with removable inserts. These cells undergo collective migration after their confinement has been lifted. Immunostaining with lysosomal marker LAMP1 at different time points revealed peripheral accumulation of lysosomes in marginal cells. This accumulation was only observed in marginal cells, whereas lysosomes were present throughout the cytoplasm of follower cells. The peripheral occupancy of lysosomes (POL) was even greater in leader cells, which could be distinguished from marginal cells by the presence of lamellipodia.

To determine whether peripheral accumulation of lysosomes is conserved in vivo, the authors used a wound healing assay in D. melanogaster embryos. As observed in epithelial monolayers, lysosomes accrued peripherally in cells exhibiting lamellipodia at the migrating front, suggesting that the dynamic reorganization of lysosomes in emerging leaders is evolutionarily conserved.

Next, they investigated whether lysosomal accumulation is necessary for leader cell emergence. To explore this, they used the Reversible Association of Motor Protein (RAMP) system10. In this system, the authors preferentially drove fluorescently tagged lysosomes toward the cell periphery or sequestered them near the nucleus. After being grown in a migration chamber, cells at the migration front were subjected to fluorescent time-lapse imaging. Strikingly, cells with peripheral lysosomes had a significantly greater proportion of leader cells compared to cells with perinuclear lysosomes. In fact, the proportion of leaders in cells with perinuclear lysosomes was even smaller than the baseline occurrence of leaders, and these cells exhibited peripheral actin cables and smaller focal adhesions, which are characteristic of follower cells.

Lysosomal accumulation is mechanosensitive and depends on actomyosin contractility

To determine how lysosomal reorganization occurs, the authors treated epithelial monolayers with blebbistatin or Y27632 to disrupt actomyosin contractility. After being allowed to migrate as sheets, the authors found that lysosomal relocalization was reduced and there was a lack of leader cells at the migrating front, suggesting that lysosome accumulation depends on force transmitted by the actin cytoskeleton.

To test the mechanosensitivity of lysosomal accumulation further, the authors adopted an optogenetic strategy to increase actomyosin contractility in specific cells within a monolayer11. Blue light stimulation resulted in either mitochondrial or plasma membrane localization of the RhoA activator ARHGEF11. When contractility was enhanced by localizing ARGHEF11 at the plasma membrane, they observed that lysosomes in adjacent cells gathered at the cell periphery away from the light-stimulated cell. Importantly, this finding suggests that physical forces transmitted via cell-cell interactions are key relocators of lysosomes. Furthermore, the authors cultured cells in micropatterned chambers with narrow beaks, which impart spatial cues to one or two cells trapped in the beak to become leaders. They observed lysosomal reorganization in cells trapped within beaks, indicating that concentrated mechanical force triggers peripheral lysosome accumulation. 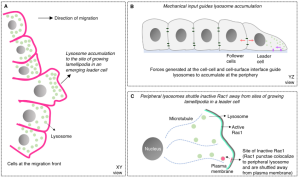 The figure above summarizes the proposed role of lysosomes in leader cell emergence during collective cell migration.

Why I chose this study

I was intrigued by this study because the idea that lysosomes are integrators of mechanical cues differs greatly from the canonical role of lysosomes as sites of catabolism. This study clearly demonstrates how much there is still to learn about organelles with ‘well-established’ functions.  I was also interested in this study due to my research background in brain tumour mechanobiology and cell migration. It would be fascinating to see if lysosomal reorganization also underlies tumour cell invasion in different models of cancer, and whether metastatic potential is affected by the mechanical properties of different tissues. I also appreciated the multiple experimental paradigms the authors used to address their research questions.

1. The models of collective cell migration used in this study mimic wound closure. Do you anticipate that lysosomal accumulation is conserved across different examples of collective cell migration such as gastrulation and tumor cell invasion?Response: The idea of lysosome reorganization being conserved across different examples of collective cell migration is exciting and we would like to explore this further. Previous reports have shown that depletion of lysosomal motility regulating factor, Arl8b, leads to diminished invasive growth of a 3-dimensional model of prostate cancer. This study indicates a pivotal role of lysosome dynamics in cancer metastasis. Degradative function of lysosomes is well understood in various physiological contexts but it will be worthwhile to look at the non-canonical role of lysosomes in these processes.