Optogenetic manipulation of medullary neurons in the locust optic lobe

Optogenetics in the locust brain: lights open new doors into the study of neuronal circuits in insects 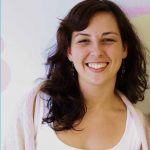 Complex behaviours resulting from sensory inputs have been widely studied in arthropods, especially insects. Examples include processing of acoustic signals in crickets, olfaction in flies and moths, and visual processing in crabs, stomatopod crustaceans, flies, moths and locusts.

Dissection of the neuronal circuits responsible for these behaviours involves monitoring of intracellular electric activity, in order to recognize the active/inactive state of a neuron. This is achieved either by electrophysiological recordings or by monitoring calcium concentration variations through calcium indicators. But more exciting is the possibility that we now have to manipulate neuronal activity through the use of light sensitive ion channels, a technique known as optogenetics. The principle is simple: light gated ion channels, usually channelrhodopsin and halorhodopsin, are expressed in the neurons of choice and a laser is used to control the opening of the channel, resulting in entrance of positive or negatively-charged ions into the cell, turning it ‘on‘ or ‘off‘.

The main difficulty with optogenetics is the need to express the genes in specific cells, usually achieved by inserting the sequence of interest and a cis-regulatory region into the genome of the animal. While in certain arthropods, like D. melanagoster, T. castaneum, honey-bees and the crustacean P. hawaiensis, transgenesis is common, for most others it is still a challenge to implement this tool.

Wang and colleagues report in this work the use of an RNA virus to insert and express a channelrhodopsin tagged with a Venus fluorescent reporter (ChopWR-Venus) into the neurons of the optic lobe of locusts, resulting in transient expression of a functional protein.

Semliki Forest virus (SFV) is an RNA virus, previously used to drive gene expression in rats and mice, but its efficiency to infect insect neurons hadn’t been shown yet. The authors injected SVF replicons, containing the ChopWR-Venus gene, downstream of an endogenous viral promoter, into the optic lobe of the locust brain, more specifically in neurons from the medulla. Injections through the locusts’ eyes resulted in channelrhodopsin expression in transmedullary neurons, as seen by the presence of the Venus reporter.

Stimulation of these medullary neurons, by exposure to a laser beam, resulted in activation of the downstream cells, the LGMD neurons, which play a role in collision avoidance behaviour. The firing rate of both medullary and LGMD neurons was dependent on laser pulse intensity, showing that it is possible to modulate neuronal activity. Spatial specificity of the stimulation was achieved by controlling the size of the laser beam, by means of a custom made laser probe.

It’s the first time that this RNA virus is used to express foreign genes in neurons of an insect in vivo and the authors prove that this technique can be used to manipulate neuronal activity by optogenetics in models where transgenesis is not possible. It can therefore be a major step in the study of neuronal circuits in ‘non-model’ organisms. Furthermore it makes the expression of other genes and siRNAs possible, useful for live cell imaging (in case of reporter genes) and for transient gene knockdown and misexpression.

One of the drawbacks of this technique is how could one restrict gene expression to a certain tissue/cell. The authors propose to use cell specific miRNAs to control gene expression post-transcription. This trick has been used before in cultured cells, but we have yet to find miRNAs specific for locust neurons. It would be interesting to know how the authors would tackle this problem. In addition, the optic lobe of insects is composed of neuropils which reside mainly outside the central brain, being rather isolated and easily identified. It’s not clear if it would be feasible to apply this technique in other less known circuits located in more central areas of the brain.