Sex can be deadly. How piwi-associated RNAs and Hedgehog signaling lead to premature death after mating in C. elegans. 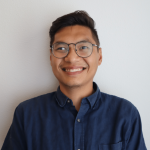 Genetic conflicts of interest between individuals within a mateship give rise to selfish strategies that promote individual fitness over that of the partner. For example, successive matings significantly reduce female longevity in many insects [1]. In Drosophila, toxic products in male seminal fluid cause increased death rates in mated females; the seminal products may also inhibit female remating and destroy other males’ sperm, facilitating sperm competition and sexual selection [2].

There is substantial crosstalk between the germline and soma to mediate optimal resource/energy allocation for growth, repair of somatic damages, and reproduction in response to physiological and environmental cues. While the absence of germline promotes longevity, hyperactivate germline triggers lifespan reduction. However, how mating might trigger somatic aging remains elusive.

The nematode C. elegans is an excellent model system to study the molecular basis of longevity owing to its rapid life cycle, short lifespan, and the plethora of molecular genetics toolkits available to study this organism. In fact, the isolation of age-1 and daf-2 mutations, both of which extend the animal’s lifespan by disrupting the insulin signaling pathway, provided the first clue in the early 90s that longevity is under genetic control [3]. C. elegans mating reduces body size and lifespan in both sexes, showing evidence for sexual conflict [4,5]. In hermaphrodites, post-mating shrinking and lifespan reduction are coupled with germline proliferation triggered by male sperm deposition, correlating with increased brood size in mated hermaphrodites [5]. In this exciting preprint, Shi and Murphy sought to investigate the pro-aging signal activated by mating in hermaphrodite C. elegans and uncovered the novel roles of piwi/Argonaute-associated small RNAs (piRNAs) and Hedgehog signaling in germline-to-soma communication, tuning aging rate and mating-induced decline. 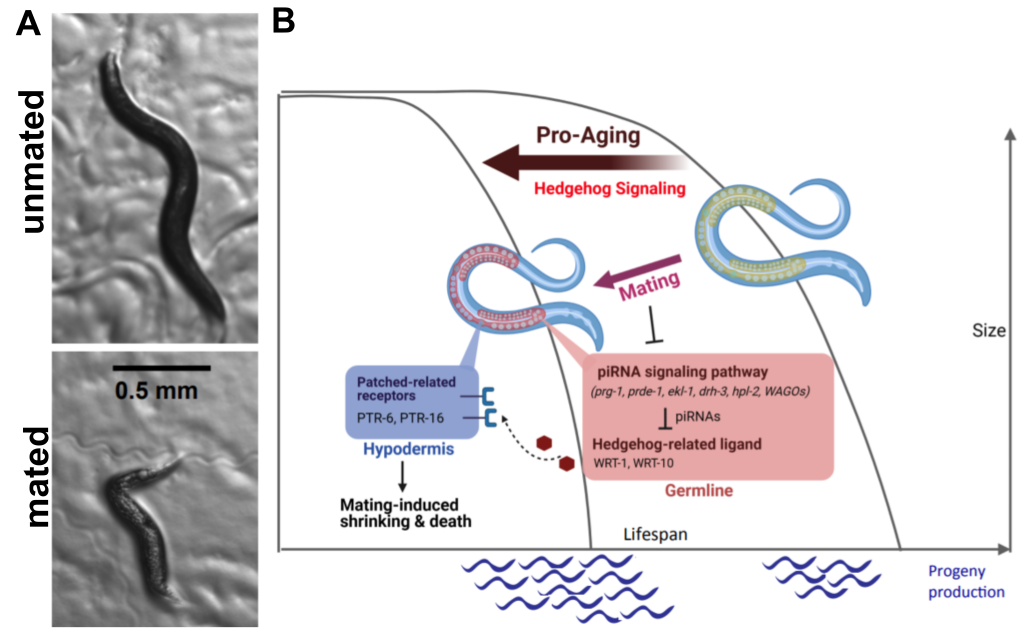 To investigate the transcriptional response of the germline in response to mating, the germlines from mated and unmated hermaphrodites were collected for transcriptomic analyses. The authors found that mating triggers upregulation of genes involved in cell proliferation, consistent with previous observation [5]. Curiously, a specific set of piRNAs (characterized by 21 nucleotides starting with an uracil) were significantly downregulated in the mated germlines.

The piRNA pathway is best known for its evolutionary conserved roles in controlling transposon activity and maintaining germline integrity. Interestingly, Shi and Murphy found that eliminating the piRNA pathway abrogates mating-induced shrinking and transcriptional changes. Additionally, disrupting germ granules, the sites of piRNA biogenesis and piRNA-mediated silencing, by eliminating germ granule core-forming MEG proteins, blocks post-mating shrinking. A rescue experiment with tissue specific expression of PGR-1, which is involved in piRNA maturation, showed that piRNAs are required in the germline to mediate mating-induced shrinking. These results demonstrate a novel role of germline piRNA pathway in promoting somatic decline upon mating.

By examining the transcriptomic data, 13 candidates were identified as the potential germline pro-aging signal. These candidates were (1) germline-specific genes that were highly upregulated in mated germline, (2) potential targets of piRNAs, and (3) produce secreted products that may exert cell non-autonomous effects in somatic tissues. A small-scale RNAi screen was then performed to investigate the effects of the 13 candidates on post-mating body size. It was found that knocking down two Hedgehog-like genes, wrt-1 and wrt-10, prevents shrinking and prolonged lifespan in mated hermaphrodites. It was further shown that eliminating the functions of Patched receptors, PTR-6 and PTR-16, similarly prevents mating-induced shrinking and early death, suggesting that PTR-6 and -16 expressed in the hypodermis may serve as the receptors for WRT-1 and -10 from the germline. These results indicate that Hedgehog signaling, which plays a conversed role in embryonic development and tissue maintenance, is co-opted as the germline-to-soma pro-aging signal in C. elegans. Importantly, while disrupting the piRNA pathway and Hedgehog signaling rescues somatic collapse and premature death, it leads to a reduction of brood size in mated hermaphrodite, indicating lifespan–reproduction trade-off due to a swift in resource allocation.

This, and other previous work from the Murphy lab, have established a great model system to study how mating influences animal’s physiology and longevity. Shi and Murphy have elegantly deployed transcriptomic and genetic analyses to uncover the novel roles of piRNAs and Hedgehog signaling pathway in regulating growth and lifespan in C. elegans.