How do breast cancer cells adapt to the brain microenvironment during metastasis? This recent preprint provides new insights into the role of Rab11b-mediated endosomal recycling. 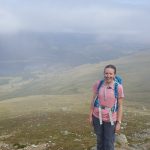 Incidence of breast cancer brain metastases is increasing (Kotecki et al. 2018) and is seen as an urgent clinical problem. Brain metastases are hard to treat using standard chemotherapeutic agents, as many of these are unable to cross the blood-brain barrier, leading to an urgent need for therapeutic advance.

Disseminated tumour cells from the original primary breast tumour are known to persist in the brain for long periods before metastatic disease becomes apparent (Harper et al. 2016; Hosseini et al. 2016). Adaptation to the brain by these disseminated cells requires their engagement with the brain microenvironment, which differs vastly from that of the primary tumour.

The interaction of tumour cells with the brain microenvironment is mainly mediated by proteins on the cell surface, including a range of cell matrix adhesion receptors such as integrins. It is increasingly being shown that control of the cell surface proteome through vesicular trafficking can play a key role in regulating cancer progression, including cancer cell migration and metastasis (Caswell et al. 2008; Ye et al. 2016). Members of the RabGTPase family are key regulators of vesicular trafficking and therefore of the cell surface proteome.

The role of endosomal trafficking in regulating the cell surface proteome of disseminated breast cancer cells in the brain metastatic environment and the impact of this on their adaptation to this environment is poorly understood. Howe et al. investigate this in detail and draw conclusions which could impact the clinical approaches to treating breast cancer brain metastases.

Initially, the authors observed temporal transcriptional changes during breast cancer brain metastases development by RNA sequencing of both early colonising cells in the brain and late-stage brain metastases. They found extensive transcriptional reprogramming upon metastatic adaptation, with 108 genes significantly upregulated in overt brain metastases. In order to identify which of these were able to functionally drive brain metastasis the authors used a Drosophila melanogaster tumour model, in which tumours develop in the eye disc and progressively invade the adjacent brain tissue. This led to the identification of a variety of genes which promote tumour growth and spread.

One of these, Rab11b, was also shown to be increased 15-fold in brain metastases when compared to matched breast cancer cell lines, while no change in expression was observed for the other Rab11-family members Rab11a or Rab25 (Rab11c). This suggests that the brain microenvironment specifically influences Rab11b expression, indicating that Rab11b could facilitate brain metastasis.

The authors demonstrated that Rab11b plays a causal role in breast cancer brain metastasis as depletion of Rab11b is sufficient to decrease brain metastasis in a mouse model. From this the authors hypothesised that the upregulation of Rab11b in disseminated cancer cells during early adaptation to the brain microenvironment could provide a mechanism for disseminated tumour cells to regulate their cell surface proteome allowing survival.

To identify the subset of surface proteins which are dependent on Rab11b for recycling, the authors carried out mass spectrometry analysis of the cell surface proteome of Rab11b-depleted cells. Rab11b-depleted cells showed a dramatic reduction in the level of adhesion proteins present on their surface. One of these, integrin β1, was shown to be strongly expressed in brain metastases and the authors showed that Rab11b-mediated control of integrin β1 cell surface levels enables successful interaction with the brain extracellular matrix and facilitates tumour cell survival.

Finally, the authors sought a therapeutic strategy to target Rab11b. They did this by using the statins, pitavastatin and simvastatin, which inhibit the mevalonate pathway, thereby preventing the geranylgeranylation of RabGTPases leaving them unable to be localised to membranes and therefore non-functional. The use of these statins inhibited the proliferation of breast cancer cells on decellularized brain matrix and Rab11b-mediated recycling of integrin β1. The statins also dramatically reduced brain metastasis incidence in in vivo mouse models, and led to an increase in survival.

Together these experiments showed the importance of endosomal recycling by a less well studied RabGTPase, Rab11b, in the adaptation of breast cancer cells to the challenging brain metastatic microenvironment, allowing eventual proliferation (Figure 1). The authors also provide a strong rationale for the repurposing of statins to prevent breast cancer brain metastasis, indicating that this could be a clinically practical strategy. 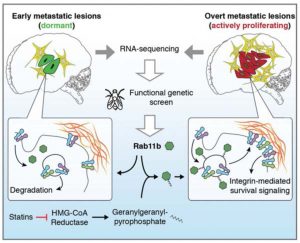 Why I think this work is important:

Regulation of the cell surface proteome represents an important mechanism by which cancer progression is driven. It is known that the dependence on different RabGTPase recycling pathways varies greatly in different environments, including between 2D and 3D environments. Therefore, I like how the authors of this study made use of a variety of applicable models, from soft agar, to decellularized brain matrix and in vivo mouse models.

I’m particularly impressed that this work contains the development of the authors’ hypothesis from the initial identification of the mechanism all the way through to potential therapeutic strategies. The in vivo work using statins to reduce brain metastatic incidence shows the potential for using these in the chemoprevention of breast cancer brain metastasis, giving opportunity for driving much needed therapeutic advance.

Thank you again for your fantastic summary of our work and excellent questions!

Broadly, yes, we propose that the general mechanism of recycling or trafficking is likely used by all cancer cells as they adapt to all metastatic sites, such as the brain. However, the cell surface proteome could vary dramatically among different primary cancer types. While recycling is one of the understudied core mechanisms for metastatic adaptation in our view, we do think the interactions will be highly cell type and context-dependent, which will require substantially more investigation. As with everything in biology, context is key.

Equally intriguing is your second question. Our data suggested that Rab11b is the isoform up-regulated in the brain based on a requirement for Rab11b specifically in the brain. How can we explain the isoform specificity? There are two options that we have considered. 1 – there is a transcriptional program activated in breast cancer cells upon arrival in the brain, which directs Rab11b up-regulation. 2 – there is a specific requirement (at the brain environment) for Rab11b based on the necessity of Rab11b-mediated recycling. There are a number of studies, including one from our lab, showing that there is transcriptional reprogramming in brain metastatic breast cancer cells. However, there is a relative lack of information about both Rab11b transcriptional regulation and the mechanisms governing Rab11b-mediated recycling, which makes it difficult at this stage to determine how or why breast cancer cells up-regulate Rab11b upon arrival in the brain.