A non-canonical arm of UPRER mediates longevity through ER remodeling and lipophagy.

Aging is defined as a time-dependent increase in mortality, and is thought to be caused by a loss of homeostasis and systemic collapse due to the build-up of harmful material1. As damaged components such as dysfunctional proteins and organelles accumulate in the cells of an aging organism, this induces a range of genetic responses in an attempt to combat the increase in stress. It has been shown that stress responses between different organelles in the cell are interconnected to provide increased buffering and robustness2. However, little is known about how cells in different tissues of an organism are connected and can signal to each other to warn about impeding danger. In a previous study, the authors of this preprint showed that in C. elegans, the accumulation of misfolded proteins in the endoplasmic reticulum (ER) of neurons induces an unfolded protein response (UPRER) that is transmitted throughout the organism to yield a similar response in cells of the intestine3. The group showed that cells of the intestine responded by inducing the heatshock response, and that this cell non-autonomous signalling counteracted the age-related loss of protein quality control4, and improved longevity.

In the study highlighted by this prelight, the authors expand on their findings and present data that the induction of heatshock response might not be the whole story. They show that the UPRER induced signal from neurons causes a dramatic remodelling of ER and lipid content of intestinal cells and that these events, rather than the induced heatshock response, are responsible for the observed lifespan extension.

The authors use a long-lived model of the nematode C. elegans (median age 24 days compared to 20 days in wildtype), which harbours a constitutively active unfolded response of the ER (UPRER) in its neuronal cells. This is achieved by tissue specific overexpression of the spliced version of the transcription factor XBP-1, bypassing the need of IRE-1 activation for UPR induction5. The authors then study the cell non-autonomous response in the cells of the intestine and identify a striking morphological change of the ER in early adulthood of these animals. Using a fluorescent marker of the ER lumen, the authors describe the formation of circular ER-derived membranes (CERMs) in the intestine. These structures are only seen in animals with neuronal xbp-1 overexpression and are visible only at day 4 of adulthood, after which they seem to disappear. Furthermore, the formation of these CERMs is dependent on expression of xbp-1 also in the peripheral tissue, but does not require the induction of the canonical UPR response. Interestingly, CERM formation is not observed when using a systemic overexpression of xbp-1, although these animals still overexpress xbp-1 in neurons, indicating that there might be some kind of feedback signalling.

Using a sorter based LAMPro technology6 the authors were able to analyze whole-body neutral lipid contents and found that the neuronal induction of UPRER caused drastic lipid depletion in intestinal cells. This lipid depletion was explained by an increase in intestinal secretion and degradation of lipid droplets (LDs) by lipophagy. In agreement with an increase in lipophagy upon xbp-1 overexpression, the authors found an increase in the number of lysosomes in the intestinal cells, and they identified the RAB-10/EHBP-1/RME-1 lipophagy complex as being essential for lipid depletion and lifespan extension. This complex was however not essential for the induction of UPRER in the intestine, demonstrating that the effects on ER-remodelling and lipophagy can be uncoupled from the canonical heatshock.

Taken together, the data presented in this pre-print highlight a novel mechanism of cross-tissue signalling, where a neuronal stress response mediates longevity via tissue-specific upregulation of lipophagy. 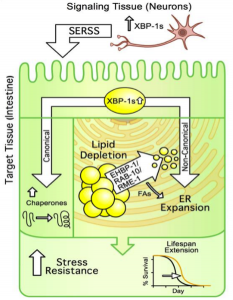 From figure 5 of the pre-print: Upon constitutive induction of UPRER in neurons, mediated by xbp-1 overexpression, a small ER-stress signal (SERSS) is transmitted to the cells of the intestine. This induces a canonical heatshock response, with upregulation of several chaperones, but also leads to a non-canonical response with ER remodelling and EHBP-1 dependent lipophagy. These cell non autonomous responses to UPRER leads to increased stress resistance and longevity.

Why I chose this pre-print

Research on the molecular mechanisms of aging is of great importance, as it is the most predominant risk factor for diseases that compromise human healthspan. While most studies use a reductionist approach, studying one process in one cell/tissue to determine its role in aging, this study uses a more holistic approach, looking at the aging process from the organismal point of view. I find this angle very interesting, and it is intriguing to discover how events in one tissue might influence the response in others, and how this impacts the process of aging. While the mechanisms underlying the observations in this study remain to be identified, I believe that the type of interconnectivity described in this pre-print is of great interest to help us understand how biological systems work, and how they might collapse.