NuRD on the wire: balancing pluripotency and differentiation in mice and human cells. 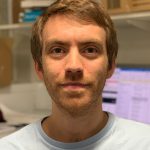 Stem cell differentiation is accompanied by extensive changes in gene expression as cells transition from pluripotency to differentiated states. These gene expression changes are influenced by the activities of chromatin remodelling complexes that alter the positions of nucleosomes and/or modify histones. The Nucleosome Remodelling and Deacetylase (NuRD) complex is one such chromatin modifying complex. This complex is well conserved in vertebrates and is known to have roles in coordinating differentiation at various stages of development. In pluripotent cells, the NuRD complex is thought to act to facilitate the exit from the self-renewing state and regulate the expression of differentiation related genes. Despite being well-studied in model organisms, the NuRD complex has not been fully characterised in human stem cells. In this study, Ragheb et al. investigate the role of NuRD in human pluripotent cells and uncover some surprising differences between the role of NuRD in human and mouse.

The authors began their investigation by comparing the composition of the NuRD complex in mouse and human pluripotent cells. Genome editing was used to add a FLAG epitope tag to the core MBD3 NuRD subunit in human induced pluripotent stem cells (hiPSCs). This tag was used to purify interacting proteins from the human cells, as well as from mouse stem cells containing an identical modification.

Orthologues of known NuRD complex components were purified from both cell lines along with other previously characterised interacting proteins. Overall, very few differences were observed in the biochemical composition of the NuRD complex between human and mouse cells, reflecting the fact that the complex is very highly conserved between the two species.

Ragheb et al. went on to study the functional consequences of disrupting the NuRD complex in human cells. Using genome editing, they created an MDB3 knockout cell line. Initial characterisation of these cells showed a surprising result. Rather than observing a homogenous culture of stem cells as seen with an equivalent knockout in mice cells, some of the human stem cells appeared to display features of differentiated cells. Given that mouse MDB3-KO cells are resistant to differentiation, the finding that human MDB3-KO cells would instead display markers of premature differentiation is unexpected. However, when these cells were induced to differentiate, they also failed to display some of the characteristic morphological markers of differentiated cells that were present in control cells or cells rescued with an MBD3 transgene. From these data, the authors conclude that in human cells, NuRD is required to not only maintain pluripotency, but also to coordinate cell fate during differentiation.

To better understand the role of human NuRD in differentiation and pluripotency, the authors next profiled the transcriptomes of control, MDB3-KO, and rescued cell lines at various timepoints throughout induced differentiation. In support of their previous observations, they saw that many pluripotency related genes were downregulated before differentiation was induced.

Overall, it seemed that whilst human NuRD deficient cells were able to respond to signals associated with the loss of pluripotency, they did not appropriately activate the gene expression programme required to coordinate differentiation.

Since conflicting results had been observed between the role of NuRD in mouse ESCs and human stem cells, the authors sought to compare these cell types more closely. Since the human cells used were in a “primed” pluripotent state, whilst previous results from mouse cells were conducted largely on “naïve” cells, it was unclear whether the differences observed were due to the species or the cell state. To address this, NuRD knockouts in primed pluripotent mouse cells (mEpiSCs) were examined. These cells resembled the naïve knockout cells, showing no signs of premature differentiation.

Ragheb et al. conclude from these experiments that the role of NuRD in regulating pluripotency and differentiation is subtly different in human and mouse. In the graphical abstract (Fig. 1) the authors liken this to an orchestra in which NuRD is the conductor. In this analogy, the human and mouse orchestras respond to the loss of NuRD in different ways. The mouse musicians fail to harmonise, but still make the right kind of noises, whilst the humans just produce a terrible racket!

Overall, this preprint provides compelling evidence that despite being closely conserved between the two species, human and mouse NuRD activity in regulating differentiation displays markedly different characteristics. I think this study is important because it provides a nice reminder that the models we use are just that – models, and that even the most highly conserved systems may behave differently in different contexts.

It seems surprising that there are so few differentially expressed genes in common between human and mouse MDB3-KOs (Figure 6) – how can you account for this? Does this suggest that human and mouse NuRD may have very few target genes/loci in common?

We know that NuRD associates with sites of active transcription in a wide array of mouse and human cell types. In this regard, mouse and human NuRD have the same targets. We also know that when we take MBD3 away, only a relatively small proportion of these genes show significant changes in expression (doi: https://doi.org/10.1016/j.molcel.2018.06.003). Genes that are highly on stay on, and genes that are off tend to stay off. It’s the genes in the middle, those that are on at moderate levels, or are in a state in which they can be readily activated, which show changes in expression upon loss of MBD3. This means that not all genes are sensitive to the changes in chromatin that NuRD exerts. I think the reason that mouse and human cells show such a small overlap in ‘significantly’ misexpressed genes is because they have largely different subsets of genes in this zone where they will be sensitive to NuRD function. This says more about the differences between human and mouse cells than between human and mouse NuRD.

You showed that the composition of NuRD is very similar in human and mouse. But this does not necessarily mean that binding loci will be similar between the two species. Do you think that differing target genes of associated transcription factors identified could be sufficient to explain the differences you see between the cell types?

We think that NuRD does the same thing in both cell types: modulates transcription of active genes, and reduces transcriptional noise amongst ‘silent’ genes. Yet the consequences of loss of this function differs in mouse and human cells. In response to a NuRD-free, noisy situation, the human cells begin to express differentiation markers in an uncoordinated fashion. This isn’t at a level that is sufficient for them to engage in any one particular differentiation lineage, but it destabilises the self-renewing state. Mouse cells, in contrast, are able to handle this increased noise and remain in the self-renewing state. When induced to differentiate the mouse cells are able to start off on the right path, but the increased noise means they lose their way, whereas human cells, which have already destabilised the self-renewing state, can’t even find the right initial path. This, we suspect, is due to differences in the stability of the self-renewing state between mouse and human cells (see doi:https://doi.org/10.1101/cshperspect.a008128).

Your graphical abstract highlights the main themes of the study whilst being an awesomely quirky artwork in its own right. Can you tell us anything about how it was created?

Claymation NuRD first appeared in a graphical abstract and video abstract associated with our 2018 Molecular Cell paper (doi:https://doi.org/10.1016/j.molcel.2018.06.003). Two of the authors (Nicola Reynolds and Brian Hendrich) are married and have kids. We had been making Claymation videos with our kids and had the idea to make one to explain the main message of that paper. We also needed a graphical abstract, so we put together a few of the images in what we felt explained the story succinctly, and then submitted both with the paper.

When it was released the response was really overwhelming: some people said it was the best graphical abstract they’d ever seen, and they just loved the video. We’ve had >5000 views of the video on Twitter to date.

We now tend to think about our graphical abstracts in terms of this Claymation NuRD. We created one for our 2019 EMBO Journal paper, and when we were finishing off the current manuscript Ramy had the idea to use music as a metaphor for how NuRD controlled lineage commitment. We adults then made the mice and humans and designed the abstract (the kids now being too old to want to help).

NuRD now lives in a Perspex box in Brian’s office, surrounded by his nucleosomes, just waiting for his next chance to feature in an abstract, or maybe another video. 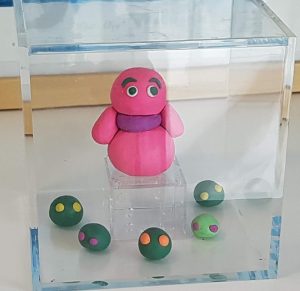