From Root Hair Site Initiation to Tip-Guided Outgrowth: A Timeline of ROP-GEF Activities. 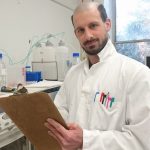 Rho-type GTPases of plants (ROPs) are small G proteins that act as molecular switches for signaling pathways1. They have an active and an inactive state, defined by their binding of either a GTP or a GDP1. Small GDP/GTP Exchange Factors (GEFs) facilitate the activation of the ROPs by exchanging GDP for GTP, while GTPase-Activating Proteins (GAPs) facilitate the hydrolysis of GTP to GDP, thereby inactivating the ROPs1. These ROP-GEF systems are involved in a wide range of developmental processes, among them root hair growth2. Root hairs are an interesting model to study in plant biology, as they are an example of tip-growing polar outgrowths of a specific cell2. Some cells in the outermost layer of a plant’s root differentiate into root hair cells, which are then able to form a hair2. This hair will grow out at a precisely specified position close to the base (or rootward side) of the cell3. By now, several factors involved in the initiation of this site, as well as in facilitating the outgrowth of the hair are known, among them members of the ROP-GEF families3. In this preprint, Philipp Denninger, Anna Reichelt and colleagues investigate the roles of specific ROPs and GEFs in defining the root hair initiation site, as well as facilitating and maintaining hair outgrowth with high spatial and temporal resolution, thereby creating a timeline of ROP-GEF activities4.

By analyzing different markers for root hair growth over time, the authors find that GEF3 first marks the initiation site of a new root hair along the plasma membrane of root hair cells, long before a bulge becomes visible. Subsequently, GEF3 facilitates the recruitment of ROP2 to the marked site by a direct physical interaction. Remarkably, ectopic expression of GEF3 in non-root hair cells was sufficient to initiate a root hair initiation domain and to recruit ROP2 to that site even in cells of the hypocotyl. The recruitment of ROP2 then triggers bulging and subsequent outgrowth of the initiated root hair. At this point, GEF3 is no longer required to facilitate outgrowth of the hair, but ROP2 now acts in conjunction with GEF4 (and potentially GEF12), which localizes to the tip only at this later stage. Finally, the receptor-like kinase FERONIA (FER) is recruited to the tip of the outgrowing root hair, where it also interacts with ROP2 to maintain polar tip growth. These analyses are accompanied by excellent imaging microscopy, which was already acknowledged with a feature in The Node’s ‘January in preprints‘.

The finding that GEF3 localization to the root hair initiation site precedes ROP-localization, and is sufficient to induce a site of polar outgrowth even in non-root hair cells, is quite remarkable. Even though many factors involved in root hair growth (including GEF3 and ROP2) were previously known, the addition of a timeline of events will be very helpful to understand this process in closer detail.

ROP2 is recruited by GEF3 in both, active and inactive state. One assumption would therefore be that ROP2 activity is actually only necessary to facilitate outgrowth of the root. Concerning this it would be interesting to know if the switch from active to inactive actually coincides with the start of hair outgrowth. Also, interaction of ROP2 with GEF4 (or GEF12) is dependent on the activity state of ROP2. From previous work it appears that GEF4 only interacts with an inactive version of ROP2, which brings up the question which factor inactivates ROP2 between these two steps5. These question could further be addressed by expressing the ROP2(GV) or ROP2(DN) variants in a rop2 rop4 background. If activity is required at the later stages, when ROP2 interacts with GEF4, the assumption would be that he ROP2(GV) variant can facilitate full hair outgrowth, while with the ROP2(DN) variant hair growth would arrest after bulging.

The authors also show that proteins from the secretory pathway/vesicle trafficking (SYP123, SEC3A), as well as factors known to play a role in maintaining polar tip growth (RHD2, FER) are all recruited to the root hair initiation site after the initiation or bulging. This fits well with the role of these proteins in facilitating outgrowth of the hair. However, it must be assumed that this process is preceded by massive rearrangements of the cytoskeleton and changes in cell wall structure at the initiation site to allow outgrowth of the hair. The authors mention that they have indeed used markers for these events, so it would be interesting to see what they found in these regards, and where these processes fall within the line of events. Does GEF3 localization to the future initiation site even precede these events, or does GEF3 localization trigger these events?

Finally, it would be assumed that the initiation site also displays specific plasma membrane (PM) features. Most likely, specific nanodomains within the PM are involved in the marking of the site and the subsequent recruitment and sequestering of proteins involved at every step from initiation to outgrowth. Since several markers for PM nanodomains are available, and it has recently been demonstrated that PM nanodomains (once identified) can now be resolved using confocal microscopy with new deconvolution techniques, an analysis of the PM at the initiation site could also be very interesting6.

Accordingly, the establishment of a timeline of events described here opens up several new research paths for more than one interesting follow-up publication.