The earth’s population is growing faster than ever, which comes hand in hand with an increasing demand for food and especially meat. Most likely, conventional meat production will not be able to keep pace with this trend; furthermore, industrial livestock farming has a significant negative impact, among others, on animal welfare and the environment1. In the last few years, plant-based meat alternatives have gained more and more popularity, but many people are not willing yet to reduce their meat consumption, and so far, no product can exactly reproduce the texture and taste of real meat. In an attempt to produce meat in a more sustainable, ethical, and healthy way, labs are trying to grow meat in a dish – also known as cultured or in vitro meat. Although there is a big interest in this emerging technology, many challenges remain such as scalability, food safety, lack of suitable cell culture lines as well as production systems, and cost-effectiveness. A major key in tackling some of the existing limitations is the cell culture medium, which often contains fetal bovine serum (FBS) and accounts for most of the production costs2.  In this preprint, Stout and colleagues present a new serum-free and cost-effective culture medium for the growth of bovine satellite cells (BSCs), the precursors of muscle cells.

Stout et al. used a previously described medium originally developed for the expansion of human-induced pluripotent stem cells as a starting point. In addition to essential, food-safe nutrients required for cell growth, this B8 medium also contains among others insulin, transferrin, TGFb and FGF-2. First, they compared the ability of serum-free B8 medium and traditional medium supplemented with 20% serum (BSC-GM) to sustain BSC short-term growth. While a 60% serum reduction was well tolerated, B8 alone was not enough to maintain cell growth for more than three days. To address these shortcomings, the authors tested several supplements varying in concentration and composition. Best results were obtained by supplementation of B8 medium with 800 μg/mL animal-free recombinant Albumin. This new formulation termed “Beefy-9” performed similar to serum-containing BSC-GM and was able to maintain cell morphology. In the next step, they established a passaging protocol for the usage of Beefy-9 and verified that passaged cells maintain the capacity to differentiate into muscle cells (Fig. 1).

Moreover, the use of Beefy-9 during long-term expansion in serum-free conditions was validated. Although BSCs cultured in Beefy-9 medium tended to accumulate lipid droplets, they maintained desired properties of muscle cells. Considering that the cell culture medium is a major cost factor, Stout and colleagues also investigated cost-reduction strategies by reducing the concentration of the expensive growth factor FGF-2. Their results indicate that lowering FGF-2 concentrations has no negative impact on short-term growth. In the same context, it was also shown that by using Beefy-9 and making bulk orders, cell culture medium costs could be reduced by about 70% compared to traditional serum-containing BSC-GM (Fig. 2). 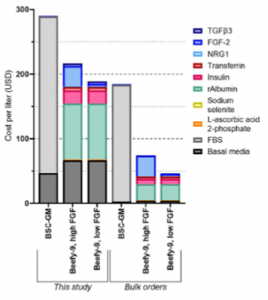 Figure 2 Analysis of expenses. Costs for BSC-GM, Beefy-9 with high FGF, and Beefy-9 with low FGF were calculated for reagents purchased at a small scale (used in this study) and for reagents ordered in bulk. In both cases, Beefy-9 is more economical than BSC-GM. (taken from Stout et al., Fig. 6, made available under a CC-BY-NC 4.0 International license)

In their study, the authors contributed a simple method to make cultured meat production easier and economically more effective and paved the way for further improvements in this field. Further optimization is necessary to reach large-scale production in order to meet the price category of conventional meat. Thus, next to optimizing media, future research efforts could, for example, focus on improving the production of recombinant growth factors, cell line engineering, and the identification of novel protein derivatives or alternatives. Being a vegetarian, I deeply encourage exploring new ways to improve animal welfare. However, there is still a long way to go until products enter local markets, and many issues such as food safety need to be addressed before then. One major step was taken in December 2020, when the Singapore Food Agency made the world’s first commercial approval of cultured meat3. So, it seems possible that in some years we can buy burgers grown in a dish, and I am very excited to follow the future progress in cultured meat research.