Not a big FUS over nothing: small molecules altering phase behavior of stress granules emerge as an effective method to reduce aggregation and reverse ALS-associated phenotypes. 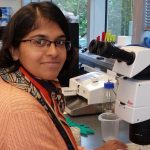 The relatively nascent concept of biomolecular condensates has stirred up increasing interest in recent years, emerging as a fundamental organizational principle in cells1. Multiple groups have described how these compartments – also described as ‘membraneless organelles’ – are formed by liquid-liquid phase separation and are functionally important for various biological processes2. Interestingly, phase separation or demixing also underlies the formation of stress granules: ribonucleoprotein assemblies that sequester mRNAs from the translation machinery under conditions of stress3. These assemblies enable cells to prioritize synthesis of proteins that are required to deal with the emergency, by temporarily halting the translation of non-essential genes3. However, there also appears to be a direct link between stress granules and disease. For example, amyotrophic lateral sclerosis (ALS) is associated with mutations in stress granule proteins4. Further, ALS-linked mutations have been shown to alter the material states of condensates to less liquid-like5. One might speculate that a productive intervention would target the material properties of stress granules, without a) affecting other phase-separated compartments and b) relying on highly specific interactions with granule components 6,7.

In this exciting new collaborative study, the authors monitor the localization and phase behavior of FUS to screen for compounds capable of modulating these properties. FUS is a protein that normally resides in the nucleus but localizes to stress granules under conditions of stress. Mutations in FUS, many of which shift its localization towards the cytoplasm, are associated with familial forms of ALS. The candidates obtained in the screen are then used to probe the alteration in properties of the phase separated condensates, and to test for reversal of ALS-linked detrimental phenotypes in patient-derived iPSC neurons and in organisms such as worms and flies.

Currently approved treatments available for ALS either target specific symptoms or serve only to slow down functional deterioration and reduce discomfort. Mutations in core stress granule proteins like TIA-1 have been associated not just with ALS but also in ALS patients with accompanying Frontotemporal Dementia8. Further, TIA-1-positive stress granules have been suggested to stimulate tau pathophysiology in Alzheimer’s Disease9. Therefore, understanding stress granule biology and identifying interventions to modulate their formation, physico-chemical properties and stability, is key to designing any potential therapeutic approach. This study accomplishes a mammoth task of identifying small molecules from a cell-based screen, demonstrating their effects on FUS condensates in vitro and in cells, and further in reversing FUS-associated defects at the level of individual neurons and organisms. Taken together, it is the first study indicating that a direct link may exist between modulation of phase behavior of subcellular condensates and the outcome on a disease-linked state.

Further, the authors show that lipoamide does not interact via high-affinity binding to FUS. Instead, the proposed mechanism of action is through modulation of physical properties of the condensates, resulting in altered phase behavior. There are likely other compounds/small molecules that can also beneficially modulate biomolecular condensates linked with ALS or with other neurodegenerative diseases.

Finally, this study provides evidence in favor of the argument that modulation of stress granules leading to recovery of normal localization of proteins like FUS, is indeed beneficial.

I would like to thank my fellow preLights team members Tessa Sinnige and Monika Magon for very helpful feedback and discussion, preprint author Richard Wheeler for comments on technical accuracy, and Suvrajit Saha for critical comments.

Thank you for picking our work and summarising it so well! It is wonderful to see our efforts to take a novel approach to tackling a neurodegenerative disease reviewed like this. This has been a challenging multi-group undertaking, from identifying the phase separation behaviour of stress granule proteins as a potential intervention point in ALS, through to testing the resulting small molecules in disease models. However the result – developing and testing the concept of a physicochemical drug – was certainly worth the effort.

We don’t yet know whether lipoamide pre-treatment is necessary to prevent the onset of pathology in animal models, we haven’t tested this in depth. If the pathomechanism of ALS is via toxicity of aggregates then pre-treatment will be needed – lipoamide and lipoic acid didn’t reverse aggregation, only slowed it. However, there are other possible pathomechanisms which can’t be excluded at this stage. We deliberately didn’t search for compounds which reverse FUS fibre formation/aggregation. There are already quite a few well-characterised compounds which dissolve prion-like fibrils but, unfortunately, they haven’t found success in trials. Instead we specifically took a different approach by focusing on compounds which altered liquid-liquid phase separation.

Presence of FUS-containing compartments in both the nucleus and cytoplasm certainly raises some interesting questions. We haven’t been able to directly confirm that lipoamide/lipoic acid enter the nucleus, tracking these small molecules in cells is very challenging, leaving the mechanism for the opposing effects on nuclear and cytoplasmic FUS-containing compartments unclear. However the important concept here is specificity, any physicochemical drug should specifically affect the target compartment – affecting the wrong compartment could be a severe off-target effect. This was why we selected cytoplasmic P-bodies for comparison to stress granules: P-bodies are ribonuclear granules with a fair similarity to stress granules but with distinct biological functions and properties. No effect of lipoamide on P-bodies suggests limited off-target effects. Of course, testing other cytoplasmic compartments would be interesting too though.

Whether promoting stress granule dissolution is a sensible therapeutic strategy certainly isn’t obvious and has been raised as a concern on several occasions. Stress granules presumably evolved for a reason! We hope for a therapeutic window though, either in dose or in time. Any side effect of reduced stress granule formation may well be long-term, such as accumulated tissue damage or increased cancer propensity through inability of cells to properly cope with stresses. The extreme severity of ALS symptoms and high speed of disease progression would provide a large temporal therapeutic window in this case. While the screen was for stress granule dissolution, there’s also the possibility that the primary effect of long-term lipoamide treatment in cells is increased stress granule liquidity which may not cause side effects.

Lipoamide and lipoic acid are certainly not like conventional small molecule therapeutics, but liquid-liquid phase separation is not a conventional drug target. This posed a lot of challenges! Particularly analysing interaction of a small molecule with a protein which remains unstructured, so can’t involve a conventional high-affinity binding site – despite it being some form of direct interaction which affects protein phase separation in a minimal in vitro system. Looking to the future, and despite these challenges, we think modulating liquid-liquid phase separation in the formation of cellular compartments will be very interesting as a therapeutic target.