Defend to live: CNGC2 forms a feedback loop between auxin biosynthesis and auxin signaling to balance plant growth and immunity! 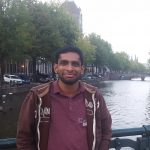 Second messengers and phytohormones form two core components that mediate intracellular signaling in plants. Calcium ions (Ca2+) serve as evolutionary conserved second messengers, which convey extracellular stress and developmental stimuli to initiate stimulus-specific responses (1). Despite the central role for Ca2+ signaling in plants, plant genomes do not encode Ca2+-specific channels. Instead, they possess multiple families of non-specific cation channels (NSCCs) that facilitate Ca2+ transport. Of these, cyclic nucleotide-gated channels (CNGCs) are an important family of transport proteins in the context of Ca2+ signaling (5).

Auxin signaling forms the foundational aspect of plant development and regulates almost all aspects of plant growth (2). Of late, several lines of evidence have pointed to extensive crosstalk between auxin and Ca2+ signaling in regulating developmental processes (3, 4).

Interestingly, while some processes may require auxin-induced Ca2+ signaling (3), some other processes seem to require Ca2+-induced auxin signaling (4). But the basis for this crosstalk and the components involved therein remain unknown. In this context, identification of the Ca2+-influx channels and the cellular components mediating the interaction between Ca2+ and auxin-dependent signaling pathways is necessary.

Knock-out mutants of CNGC2 display multiple, unconnected phenotypes including stunting, Ca2+ hypersensitivity, autoimmunity, and late flowering, amongst others. (6, 8). Although CNGC2 is one of the most well-studied members of the CNGC family, most of these investigations have focused on the immunity and Ca2+-related phenotypes exhibited by cngc2 (6, 7). This preprint by Chakraborty and colleagues directly links CNGC2 with intracellular auxin responses, thereby providing a fresh perspective on the function of this channel. 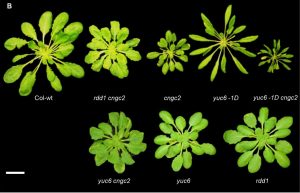 In an attempt to identify mutations that suppressed cngc2 phenotypes, the authors began by performing a genetic suppressor screening that identified a loss-of-function mutation (named repressor of defense, no death1, rdd1) in the locus coding for YUCCA6 (YUC6) protein, a central enzyme in the biosynthesis of endogenous auxin, indole-3-acetic acid (IAA), in plants. rdd1 mutation rescued all phenotypes of cngc2, except Ca2+ hypersensitivity, to a significant level. In line with the function of YUC6, the authors found increased levels of IAA in both shoots and roots of cngc2 seedlings that was partially reversed in rdd1cngc2. But surprisingly, mutation in TAA1, another protein involved in IAA biosynthesis, could also rescue cngc2 phenotype, suggesting that the cngc2 phenotype is the result of the broader process of auxin biosynthesis.

In addition to auxin biosynthesis, a role for CNGC2 in auxin signaling is evidenced by reduced root gravitropism exhibited by cngc2 seedlings, which was rescued to a certain extent in rdd1 background. To understand more about the function of CNGC2 in auxin-mediated processes, the authors studied the auxin distribution in response to external IAA application using the β-glucuronidase-based histochemical auxin reporter DR5::GUS and the degron-based fluorescent DII-VENUS auxin biosensor. While DR5::GUS activity in cngc2 was near to background levels, DII-VENUS fluorescence decay was slower in cngc2 upon IAA application. These indicate a positive correlation between CNGC2 function and auxin signaling, unlike the inverse correlation found for auxin biosynthesis.

Since the CNGC2 channel is known to be a functional Ca2+ transport protein (6), the authors next looked to examine Ca2+ transient response in roots in response to auxin treatment. While cngc2 showed much weaker signals compared to wild type, it was rescued to appreciable levels in rdd1cngc2 double mutants.

Altogether, while CNGC2 suppresses the process of auxin biosynthesis, it is required for both auxin signaling events as well as auxin-mediated Ca2+ influx. It is possible that CNGC2- mediated Ca2+ signaling is required to negatively regulate auxin biosynthesis in a negative feedback loop. Significantly, the authors point out the close similarities between the phenotypes displayed by cngc2 and cngc4 and suggest these both form heteromeric channels in regulating auxin homeostasis. Since Ca2+ transients in response to IAA application is not completely abolished in cngc2 seedlings, and functional CNGC2-CNGC4 heteromeric channel has been earlier shown to mediate Ca2+ signals in response to pathogen attack (7), this proposition may be functionally feasible in vivo. 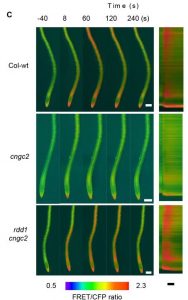 The recent reports on the crosstalk between auxin and Ca2+ signaling have raised fundamental questions on how the pathways mediated by these signaling factors are regulated. Li and colleagues had shown that Ca2+ signals are required for polarized localization of PIN proteins (4) and CNGC14 is already known to be involved in auxin-mediated Ca2+ influx. However, CNGC2 might be very different from CNGC14 since it shows disparate phenotypes in development as well as immunity. How these two aspects are connected and if they both link to auxin signaling would be a central question to address in the time to come. Future studies need to identify the auxin-dependent processes in which CNGC2 (and possibly CNGC4)- mediated auxin signaling is of relevance. Root gravitropism is an obvious candidate due to the gravitropic defects displayed by cngc2 seedlings but processes in the shoot can also be affected (8). It will be interesting to see if CNGC2 and CNGC4 actually form heteromeric channels in mediating this process and if found so, whether it is regulated by calmodulin (CaM), as was previously suggested (7).

The current study has examined a key link that connects auxin and Ca2+ signaling. Though this connection is compounded by the fact that knockout mutants of CNGC2 exhibit diverse phenotypes, most phenotypes are reversed by rdd1, which suggests that this channel may function mostly to maintain auxin homeostasis in root and shoot tissues. This work demonstrates the power of genetics in uncovering novel functions of known proteins and builds a strong foundation that raises many pertinent questions that are expected to be answered in the years to come.

1. Based on the current evidence available with respect to CNGC2, how dispensable can it be for cellular auxin homeostasis?

2. Since CaM regulation of CNGCs is a recurring feature in Ca2+ signaling, do you think CaM might associate with CNGC2 in the context of this paper?

CaM regulates CNGC12 both positively (channel opening) and negatively (channel closing) (DeFalco et al., 2016). It will be very interesting to see how different isomers of CaM might also regulate CNGC2 in this negative feedback loop of auxin homeostasis.

3. On a general note, how important can auxin – Ca2+ signaling crosstalk in regulating the normal growth and development of plants?

I suggest the following review as a starting point for anyone interesting in having a general overview of auxin-Ca2+ signaling crosstalk: Vanneste, S., & Friml, J. (2013). Calcium: the missing link in auxin action. Plants, 2(4), 650-675.