Fatty liver and PPARα: Is it all in the liver? Regnier et al. study the role of hepatic and extrahepatic PPARα in a mouse model of diet-induced obesity

Defects in fatty acid homeostasis in the liver lead to lipotoxic tissue damage, such as hepatosteatosis. PPARα (Peroxisome Proliferator-Activated Receptor Alpha) is a nuclear receptor that plays a key role in metabolic homeostasis, modulating the expression of enzymes involved in fatty acid oxidation. Régnier et al. show in their recent preprint a novel hepatic-specific action of PPARα in the in vivo response against lipid overload (1).

Fatty liver disease is a global health burden. A recent meta analysis calculated a NAFLD (Nonalcoholic Fatty Liver Disease) prevalence of 25% in the global population (2). A characteristic feature of NAFLD is the accumulation of neutral lipids in lipid droplets (Fig 1). 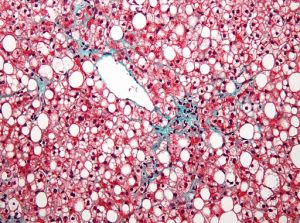 Figure 1. Representative picture of a fatty liver from a NAFLD patient, stained with Masson trichrome staining. Steatosis is demonstrated by the big white “holes”, that are lipid droplets, in which neutral lipids are accumulated to prevent lipotoxicity. Credit: Nephron [CC BY-SA 3.0 (https://creativecommons.org/licenses/by-sa/3.0)], from Wikimedia Commons

NASH (Nonalcoholic Steatohepatitis) represents a more severe stage of fatty liver disease not caused by alcohol, characterized by inflammation (hepatitis) and liver cell damage. NASH predisposes patients to much more life-threatening conditions like cirrhosis or hepatocarcinoma. NASH treatment is still an unmet clinical need. Even though dietary and lifestyle modification can reverse fatty liver, unfortunately, few patients manage to achieve the target of weight loss and maintain long-term lifestyle changes. That’s why pharmacological treatment is so important. In order to develop drugs that successfully target NASH progression, it is crucial to identify the molecular players involved in the pathophysiology of this disease.

PPARα is a transcription factor of the family of PPAR nuclear receptors. In metabolically demanding situations, such as fasting or exercise, and upon the binding of endogenous lipids as ligands, PPARα induction promotes the transcription of the enzymatic machinery required for the oxidation of fat. The potential of PPARs’ (alpha, delta, gamma) modulation for the treatment of fatty liver diseases and metabolic disorders is already well known. Wy-14,643, a PPARα-specific agonist, prevents the development of methionine-choline deficient (MCD) diet-induced steatohepatitis (3). However, despite the beneficial effect shown by some drugs such as thiazolidinediones, PPAR agonists have adverse effects or limited potency (4). Whole-body knockout PPARα mice fed with high-fat diet (HFD) or MCD diet, developed more severe steatohepatitis than control animals (5–7). Here, the authors expand the knowledge of the actions of hepatocytic and extrahepatocytic PPARα in the progression of NAFLD in a mouse model of diet-induced obesity. They already showed in a recent report that MCD diet, ageing, and a short-term HFD induce more severe hepatosteatosis in hepatocytic-specific PPARα-deficient mice (8). In this study, the authors induced hepatosteatitis to mice by feeding them 12 weeks with a high-fat diet, and tested the role of hepatic and extrahepatocytic PPARα in this model. To ascertain the role of hepatic/extrahepatic PPARA they employed whole-body (Ppara–/-) and liver-specific Pparα knockout (Pparahep-/-) animals.

A first hint on the extrahepatic role of PPARα was demonstrated by the fact that Ppara–/- animals became more overweight than WT and Pparahep-/- animals, even under control diet. This obese phenotype was not due to glucose intolerance, since Ppara-/- and  Pparahep-/- did not present fasting hyperglycemia. Liver histology can provide valuable information of steatosis and inflammation in these animals models. The authors observed that HFD exacerbated steatosis in both PPARα-deficient mice much more than in WT animals, depicted by increased number of lipid droplets and hepatic triglycerides. Plasma markers of liver injury, ALT (alanine aminotransferase) and AST (aspartate aminotransferase), were only increased in PPARα-deficient mice fed with a HFD, but not in WT animals. Together, these data show how hepatic PPARα deficiency facilitates the development of hepatosteatitis in the context of obesity.

To better understand the molecular physiology underlying the development of steatosis under HFD in the different genotypes studies, the authors assessed the transcriptome response against HFD in the liver using microarrays. This approach allows to discern the specific changes happening in the liver of hepatic-deficient PPARA mice compared to whole body Ppara-/- mice. They found that only around 5% of the DEGs (differentially expressed genes) sensitive to HFD were regulated independently of hepatocyte or whole-body PPARα. This illustrates the crucial role of this nuclear receptor in the physiological response against a fat-enriched diet. The authors also inferred from this transcriptomic experiment that the response against HFD is different in hepatocyte-deficient PPARα mice and in whole-body PPARα KO mice. These different sets of genes induced or repressed in the different genotypes can shed light on PPARA-regulated responses that can be targeted for NASH treatment. A group of 337 genes were upregulated in Ppara-/- and Pparahep-/- livers, but not in WT, which suggests a negative regulation of these genes by PPARα. Among the enriched KEGG pathways in this set of genes, the authors highlighted inflammatory response, which supports the idea that PPARα is essential to prevent an exacerbated inflammatory response in a high-fat diet environment.

The authors also performed metabolomics in the livers of the different experimental groups, using proton nuclear magnetic resonance (1H-NMR) and targeted lipidomics. With the data obtained, they created a PLS-DA (projection to latent structures for discriminant analysis) model that, again, separated Ppara-/- and Pparahep-/- animals fed with HFD in two different groups, highlighting the role of extrahepatic PPARα in the response against high-fat diet. This extrahepatic PPARα response is also evidenced at the level of lipid metabolism since the lipids measured clustered in different groups depending on the genotype and diet.

What I liked about the study

I liked that the authors used a model (high-fat diet) that is more suited to the problematic of obesity and NASH, rather than other models already tested with a very similar approach.

The employment of two different knockouts (hepatic vs whole-body PPARα knockout), together with the integration of -omics techniques, allows to discern the specific hepatic functions of PPARα versus the extrahepatic functions. This is an important topic in the field, yet to be resolved, but the results of this study cast some light on the role of PPARα in the development of NASH.

Dear Pablo,
Many thanks for your constructive review.
We are currently revising the manuscript and will consider your review to improve the manuscript.
All the best,

You are welcome. Thank you for you comment and good luck with the review.