Bringing disorder to the kinesin-3 subfamily 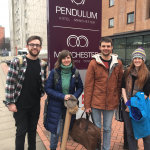 Molecular motor proteins are responsible for several mechanical roles during the cell cycle.  The diverse functions of kinesin, dynein and myosin motors include long-distance transport of intracellular cargoes, muscle contraction and organisation of the mitotic spindle in a dividing cell. In mitosis, kinesins play a pivotal role in centrosome separation, chromosome alignment and organisation of the mitotic spindle. Kif14 is a kinesin-3 protein which localises to the central spindle and disruption of its activity results in cytokinesis failure, however the precise molecular function of Kif14 is poorly characterised. Zhernov et al have addressed the underlying biophysical properties of Kif14 through reconstitution of its activity in vitro with purified proteins. 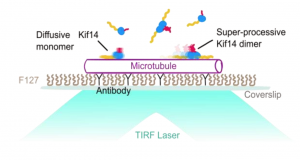 Figure 1. Illustration of Kif14 diffusion and processivity on microtubules in vitro

Zhernov et al probe the function of the Kif14 intrinsically disordered domain by generating several truncations to examine the effects of amino acids 1-355 on Kif14 motility. By imaging single molecules of Kif14(768)-eGFP using TIRF microscopy (Figure 1), the authors found that 89% of interactions with microtubules were diffusive by nature. The remaining encounters of Kif14 (768)-eGFP were highly processive plus-end directed events, with an average velocity of 153 nm/s and a run length of 7.3 µm. In the absence of the disordered region, Kif14(355-768)-eGFP exclusively displayed processive encounters with the microtubule, but demonstrated a 10-fold reduction in run length. This indicates that the positively charged, disordered region acts as an electrostatic tether and is responsible for the superprocessivity of Kif14.

To further examine the properties underlying this anchoring mechanism, the authors observed the behaviour of a Kif14 truncation containing the disordered domain fused to eGFP (Kif14(355)-eGFP). This construct was exclusively diffusive on the lattice and demonstrated a 7-fold higher diffusion constant in contrast to truncations containing the motor domains (e.g. Kif14(768)-eGFP), indicating the presence of the motor domains in the native protein impacts Kif14’s diffusive activity. Interestingly, Kif14(768)-eGFP was also demonstrated to accumulate at the plus-ends of microtubules, a feature reminiscent of the superprocessive kinesin-8 family members (Mayr et al., 2011). Surprisingly, tip accumulation was not dependent on Kif14’s superprocessivity, but instead is due to an inherent preference for GTP-tubulin over the GDP-lattice. The authors showed that synergy between the disordered region and the motor domains was required for efficient tip recognition, but Kif14 had no significant impact on microtubule dynamics once it reached the plus-end. Overall, this in vitro characterisation highlights that the intrinsically disordered domain of Kif14 enables several unique interactions with the microtubule, which contribute to its superprocessivity and autonomous plus-end tip tracking.

The authors next sought to address the basis of Kif14’s varying behaviour on the microtubule, as single molecules either displayed diffusive or processive encounters but never a mixture of both. By measuring the GFP intensities of single molecules during in vitro assays, the authors demonstrated that the oligomeric state of Kif14 determines whether encounters with the microtubule are diffusive or processive. Here, they showed that diffusive Kif14(768)-eGFP subpopulations were exclusively monomeric, whereas processive motions were only carried out by Kif14(768)-eGFP dimers. Whether a monomer-dimer transition underlies a physiological mechanism of Kif14 autoregulation has yet to be addressed thus far.

As the diffusive anchor significantly enhances the processivity of Kif14, Zhernov et al next investigated whether this region could enhance transport on the crowded microtubules of the spindle midzone. In order to reproduce a crowded environment, the authors purified mCherry-Tau and incorporated it into their single molecule assays. Tau is a microtubule associated protein (MAP) and has been heavily implicated in the development of Alzheimer’s disease, inhibiting processive cargo transport by kinesin-1 and kinesin-3 (Monroy et al., 2020). In the presence of mCherry-Tau, Kif14(768)-eGFP was able to processively move through cohesive Tau islands on the microtubule. In contrast, removal of Kif14’s intrinsically disordered domain rendered the truncated motor sensitive to crowding on the lattice, restricting Kif14(355-768)-eGFP motility to regions outside of mCherry-Tau islands. Therefore the additional electrostatic interactions facilitated by the N-terminal disordered anchor likely facilitate long range Kif14 motility, even under extremely crowded conditions.

In mitosis, Kif14 localises to the spindle midzone and midbody, associating with the microtubule cross-linker PRC1. However, whether Kif14 contributes to cross-linking is unclear, despite its requirement for successful cytokinesis. As several mitotic kinesins (e.g. Eg5, HSET) contribute to spindle organisation and Kif14 contains a secondary microtubule binding site, Zhernov et al carried out in vitro microtubule sliding assays to investigate whether Kif14 could contribute to microtubule cross-linking at the midzone. In the presence of Kif14(768)-eGFP, rhodamine labelled microtubules were observed to undergo robust anti-parallel sliding along static microtubules immobilised to the coverslip. In some cases, microtubules were also cross-linked in a parallel fashion but remained static. Furthermore, the ability to cross-link microtubules was shown to be independent of the motor domains, as the monomeric Kif14(355)-eGFP anchor was capable of linking two microtubules to each another through diffusive interactions.

What we liked about this preprint?

Using in vitro reconstitutions this preprint characterises the precise function of the unusual disordered domain located at the N-terminus of Kif14, highlighting how this region enables the motors’ superprocessive motion along microtubules. This work also indicates that in coordination with PRC1, Kif14 is likely to contribute to microtubule cross-linking and sliding at the midzone where it has been previously reported to localise in vivo, thus providing further insight into how kinesins help coordinate mitosis.

Similarly to the truncated Kif14(1-768)-eGFP construct, also the full-length Kif14 exhibits both processive dimeric and diffusive monomeric populations in vitro. In the case of full-length Kif14, the fraction of dimeric molecules is larger than in the truncated construct, which we attribute to a longer coiled-coil region stabilizing the dimeric state. We will include this data in the final version of the article. It thus seems that Kif14 can efficiently dimerize in the absence of cargo. Nevertheless, cargo might further increase the dimerization propensity.

Localization of Kif14 to midbody is important for the progression of cytokinesis. Midbody is an array of antiparallel microtubules enriched with microtubule-associated proteins, such as PRC1, CLASP1, or CEP55 and kinesins, such as Kif20a, Kif20b and Kif23 and a number of regulatory factors. All these proteins decorate midbody microtubules throughout cytokinesis and, especially kinesis having similar microtubule binding sites, may interfere with Kif14 processivity. Kif14 N-terminal anchoring domain functioning as an additional microtubule-binding site, might allow the motor to circumvent these obstacles even if its motor domain unbinds from the microtubule lattice.

Sliding driven by Kif14 seems to be similar to Eg5 or Kif4a and might indeed provide an alternative sliding mechanism. Previous studies showed that the N-terminal anchoring domain of Kif14 is a PRC1 binding site. Hence, in vivo Kif14 may further reinforce cross-linking and assist sliding, working in team with Kif4a and PRC1. This might be an interesting question for further research.