As a gatekeeper between the blood stream and the central nervous system (CNS), the blood-brain barrier (BBB) tightly regulates the transport of macromolecules into the brain and protects from harmful, undesired intruders. However, this “natural wall” also considerably blocks the entrance of therapeutics (1). In recent years, significant progress was made in developing strategies to overcome this barrier. One very promising approach is the use of brain shuttles – antibodies which are able to cross the BBB by binding to receptors on endothelial cells, an event also known as receptor-mediated antibody transcytosis. The efficiency of different brain shuttles has been demonstrated in various animal models (2,3), however, the advancement of these brain targeting molecules is limited by the lack of high-throughput in vitro models of the human BBB. Furthermore, the exact mechanism of transcytosis remains poorly understood. By combining a high-throughput array with a gene editing technology, this pre-print presents a useful tool not only suitable to efficiently test new biopharmaceuticals, but also to systematically study the mechanisms of antibody transport.

What has been done

To be able to generate several thousands of organoids, primary human astrocytes and pericytes were cultured with immortalized human brain endothelial cells on hydrogel-covered plates in a 96-well format. Interestingly, this technique was previously used to form gastrointestinal organoids (4). After two days in culture, cells reproducibly formed a viable neurovascular structure which closely resembled the composition of the BBB in vivo, with a monolayer of endothelial cells at the surface in proximity to a layer of pericytes. Astrocytes were located in the organoid core.

2) Development of an automated analysis tool

Subsequently, (immuno)fluorescence was used to detect molecules that are able to cross the BBB.  To allow the analysis of a large number of BBB organoids, the authors created an imaging workflow automatically quantifying the fluorescence intensity at the center of organoids. This read-out was used to estimate the transport of macromolecules across the BBB. With this analysis tool, they could show that the BBB organoids exhibit an intact barrier function as they prevented the entry of fluorescently labeled dextran molecules into the organoid core.

In the next step, Simonneau and colleagues tested the use of the established BBB array as a screening platform for receptor-mediated transcytosis. The organoids were incubated with a previously described brain shuttle which binds to the extracellular domain of the human transferrin receptor (TfR) (5). This antibody was detected in the core of the BBB organoid in a time- and dose- dependent manner, while non-targeting human IgGs and a mouse brain shuttle (antibody against the mouse TfR) were not able to enter the center of organoids (Fig. 1). Thus, the designed array can be used to identify brain shuttles effectively crossing the BBB. 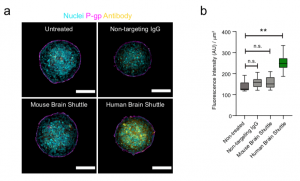 a) Organoids were incubated with different brain shuttle constructs and analyzed by confocal microscopy. Brain endothelial cells were labeled with an anti-Pgp antibody shown in magenta, nuclei were stained with DAPI (blue) and brain shuttles were labeled with anti-human IgG Fab fragments shown in yellow. b) Quantification of transcytosed brain shuttles by measuring fluorescence intensity (taken and modified from Simonneau et al., 2021, Fig. 3, made available under a CC-BY-NC 4.0 International license)

3) Investigating molecular mechanisms of brain shuttle transport across the BBB

Finally, the authors combined their assay with CRISPR-based gene editing to investigate the role of specific genes in receptor-mediated transcytosis. A human brain endothelial cell line stably expressing Cas9 was used to build knockout cell lines lacking genes coding for proteins with known function in macromolecular transport and endocytosis, such as TfR, clathrin heavy chain and caveolin-1. These cell lines then were used in BBB organoid assays to analyze their effect on the ability of antibodies to cross the BBB. Importantly, the manipulation of endothelial cells did not alter their assembly into functional organoids. As anticipated, the entrance of human brain shuttles was significantly reduced in organoids lacking TfR and clathrin heavy chain, while caveolin-1 knockout did not affect their transport.

Antibody-based delivery is an elegant and auspicious approach to promote the transport of CNS drugs across the BBB; but to bring them to the clinic, it is inevitable to test newly developed brain shuttles at a large scale in appropriate human BBB models and to better understand the mechanisms involved in their transport. The screening platform presented in this pre-print refines existing in vitro BBB organoid arrays by significantly increasing the yield of highly reproducible organoids per experiment while reducing the handling time (6). Additionally, the analyzing process is facilitated by the design of an automated imaging workflow. Furthermore, the combination with a gene editing tool offers great opportunities for mechanistic studies. Contrary to previous models, this assay also enables the study of transport of native, non-labeled antibodies. However, a limitation of this approach is that it does not allow absolute quantification of the number of transported molecules.

Altogether, I am eagerly awaiting future advances in the development of brain shuttles fostered by the use of high-throughput BBB organoid assays.

Thank you very much for highlighting the pre-print, which is now published with SpringerNature Digital in Fluids and Barriers of the CNS (https://fluidsbarrierscns.biomedcentral.com/articles/10.1186/s12987-021-00276-x). At SUN bioscience, we and our colleagues have successfully established models of not only the blood-brain barrier and intestine, but also cancer (e.g. colorectal, pancreatic or sarcoma), liver, gastruloids, retina, and so many more organoids. SUN bioscience’s hydrogel-based technology (Gri3D) is very versatile and we are sure it will help many scientist around the world to streamline and automate their 3D cell culture assays!