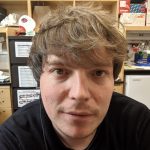 The 3D culture system has allowed scientists to better understand cell behaviour within complex structures, namely organoids and spheres (Clevers, 2016; Fatehullah et al., 2016; Rossi et al., 2018). Organoids  can be generated from stem cells of any germ layer and can replicate the cell composition of virtually any organ in the human or mouse body (continually being expanded to include more and more species each year), and can also be used to model developmental growth and diseases (Kim et al., 2020; McCauley & Wells, 2017). Growing stem cells in 3D conditions has been long used in stem cell research, but it was not until 2009 that scientists began to use a well-defined media, working with primary stem cells from the intestine (Sato et al., 2009). As of today, organoid systems have advanced so much that scientists can even replicate diseases such as lung adenocarcinoma in tumor organoids in vitro (Dost et al., 2020; Sainz de Aja et al., 2021). Organoid stem cells can also be differentiated from induced pluripotent stem cells or embryonic pluripotent stem cells from both human and mice, which allow for an easy way of genetic manipulation and increase the possibility to find donors, as these cells can be obtained from a blood sample. Compared to 2D cultures, 3D organoids are closer in gene expression and metabolic function to the actual in vivo organ. Importantly, due to these similarities, these organoid tools decrease the necessity of animal experimentation.

One of the main problems in 3D organoid culture system is the heterogeneity of the organoid formation efficiency, morphology and function (Hofer & Lutolf, 2021). To reduce the variability, scientists have set out to define the media and the matrices used in experimental protocols by using engineering strategies. Such strategies include defining the extracellular matrix (ECM), controlling for the viscoelasticity or the stiffness of the niche, or simplifying the protocol as much as possible (Velasco et al., 2019). The most used product to emulate the ECM is matrigel, which is a product of the Engelbreth-Holm-Swarm mouse sarcoma mostly composed of laminin-111. However, this product is quite variable from batch to batch as the ingredients are not well defined. It is also of mouse origin, so there can be difficulties in applying the results to human stem cells. For all these reasons, scientists have been trying to not only chemically define the media of the organoids, but also its ECM. Currently existing alternative matrices from natural materials are fibrin, collagen or hyaluronic acid.

In this paper, authors use hyaluronic acid-based hydrogels with microcavities to generate uniform lung alveolospheres. Alveolospheres are 3D organoids mainly made out of Alveolar Type 2 (AT2) cells. AT2 cells are the stem cells in the alveoli and producers of surfactant. This study describes a simple, matrigel-free 3D organoid culture system.

Figure 1. Schematic of the plating of iAT2 cells on top of the microwell. t means time.

iAT2 cells grown in microwells are functional and can be transplanted

Transmission electron microscopy revealed that structures such as microvilli and tight junctions were present in the microwell grown iAT2 similarly to those of primary AT2 cells. These experiments show that iAT2 grown in microwells mature more than those grown in matrigel.

Transplantation of iAT2 into immunosuppressed mice cells was successful at integrating into the host alveolar tissue but no difference in outcome was found between iAT2 cells cultured in matrigel or microwells. The authors found no differentiation towards AT1 cells. However, cells retained proliferative capacities as shown by Ki67 marker.

Primary mouse AT2 cells can be grown into microwells 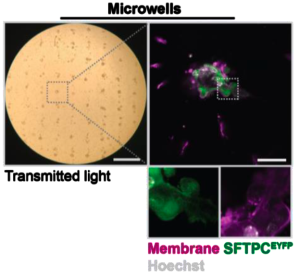 Figure 3. Representative image of an alveolosphere within the microwell culture. SFTPC-CreERT2;R26ReYFP at 7 days of culture. Membrane in magenta, SFTPC in green and nuclei in grey.

3D cultures of AT2 cells are currently being used more and more for disease modeling of lung diseases involving the alveoli. From lung adenocarcinoma to COVID, there are multiple deadly diseases that use AT2 alveolospheres for drug screening or to acquire more fundamental understanding of the disease. However, the way AT2 cells are cultured is currently far from being standardized and uniformally controlled. In this work, the authors aim to obtain homogeneous alveolospheres and they succeed at doing so in both human and mouse AT2 cells. This breakthrough opens the door not only to a more systematized culturing method, but also to a controlled environment that was lacking to this date.

The alveolospheres generated by the authors from iAT2 cells, seem to be more mature than the 3D matrigel counterpart, which render the iAT2 cells more useful as they better reflect the adult alveolar type 2 cells.