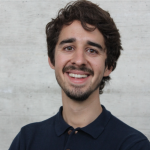 In metazoans, germ-band extension is a morphogenetic process that drives body axis elongation along the anterior-posterior axis1. The extension is highly dynamic and lasts for about 2.5 hours, but most of the visible changes are concentrated during the first 45 min, called the rapid phase. This extension is thought to be mainly driven by cell intercalation2, in which planar polarization of actomyosin and interaction with E-cadherin (E-cad) at adhesion junctions play critical roles in junction remodeling3. Moreover recent work has shown that epithelial junction remodeling is achieved through the action of two pools of non-muscle myosin II (junctional or medial Myo), which are regulated separately3,4.

Having established the Vinc/E-cad ratio as a meaningful measure of tension, they were then able to address the core focus of the paper: to determine the specific contribution of each pool of Myo (junctional and medial) to adhesion complexes. The authors achieved this by selectively reducing or overexpressing medial Myo. In doing so, they found that medial Myo was responsible for the recruitment of adhesion complexes at the junction globally, whereas junctional Myo was responsible for the planar distribution of adhesion complexes by inducing shear stress on vertical junctions.

Why I chose it

A strength of this study lies in its power to decipher the subcellular physical mechanisms that drive ectodermal convergent-extension movements. By looking at the specific contribution of two different pools of myosin on adhesion complexes, the authors offer us a very detailed and novel perspective on junction dynamics. Moreover, the combination of invasive (laser ablation) and non-invasive (mechanical inference, correlative analysis) measurements in an intact living Drosophila embryo allows the authors to elegantly derive physical properties (tension, stress) of the junction.

It would be interesting to investigate if these results (the specific contribution of two different pools of Myo to adhesion complexes) could be transposed to different model systems, such as in the fly notum. Finally, and as the authors point out, it remains to be elucidated exactly how the generation of contractile forces by myosin-II activity controls junction remodeling during morphogenesis.