Two microRNAs are sufficient for embryogenesis in C. elegans

How many microRNAs does it take to make a baby? Dexheimer, Wang, and Cochella find that the activity of two microRNAs is sufficient to prevent the embryonic lethality of Microprocessor depletion in the nematode C. elegans. 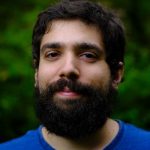 In 1993, teams led by Gary Ruvkun and Victor Ambros discovered that particular tiny RNAs, which do not encode for proteins, can silence genes with complementary sequences. These tiny RNAs, now known as microRNAs, exist in plants and animals and repress gene expression post-transcriptionally. Biogenesis of metazoan microRNAs is complex: many enzymes and accessory factors are required, in a series of nuclear and cytoplasmic reactions. These reactions turn an RNA Polymerase II transcript (pri-microRNA) into a mature microRNA. Primary microRNA transcripts organize into (at least) one hairpin structure that serves as a substrate for the microprocessor. The microprocessor, composed by the endonuclease Drosha and Pasha/DGCR8, trims the extremities of the primary transcript, leaving only a hairpin (or pre-microRNA). Dicer endonucleases further process the hairpin in the cytoplasm. The mature microRNA guides its Argonaute protein effector partner to partially complementary mRNA targets, ultimately leading to post-transcriptional gene silencing. The depletion of Dicer or Microprocessor in animals leads to highly penetrant embryonic lethality. This implies that at least a subset of microRNAs are essential for development. While a minority of microRNA mutants does show strong developmental defects, a great number of microRNA knock-outs have no discernible phenotype, suggesting more subtle roles in gene regulation. Studies in zebrafish have shown that miR-430 rescues a subset of the developmental defects brought about by Dicer mutation. However, the microRNA or microRNAs required for early embryonic development, and capable of rescuing microprocessor or Dicer defects, have not been identified in other animals. In a recent preprint, Dexheimer and colleagues find that two microRNAs, of the miR-35 and miR-51 families, rescue microprocessor lethality in the nematode Caenorhabditis elegans.

I like how this paper uses novel, elegant approaches to tackle old problems. MicroRNA researchers know about microprocessor and Dicer embryonic lethality since the early days of microRNAs, but tools to understand these processes in vivo were lacking. Even nowadays, establishing the necessary tools was a challenging and long process, as first author Philipp Dexheimer notes in a Twitter thread describing his work (https://twitter.com/PhilDexheimer/status/1277579653423812610). The mirtron transgenes were a brilliant idea! As miR-35 and miR-51 microRNA families are broadly conserved, this preprint lays the groundwork for future studies addressing the embryonic requirements of homologous microRNAs in other animals.

This work is another important reminder that a lot of great biology can still be unraveled using the nematode C. elegans. For small RNAs in particular, the contribution of C. elegans research was tremendous: e.g. it was in C. elegans that microRNAs and RNAi were initially described. It may be tempting to dismiss these little bugs, as invertebrates seem pretty far away from animals more like us, but in doing so, which other broadly relevant insights will we be missing?

A framework for understanding the roles of miRNAs in animal development, Alberti & Cochella, 2017

Upon acute removal of the Microprocessor, the half-life of a given miRNA is likely the main determinant of when it will be fully depleted. We waited ~24 hours after removing Drosha and Pasha before collecting embryos to achieve maximal depletion. Small amounts of maternal miRNAs left over in 2-cell embryos were likely processed before Microprocessor depletion and not completely turned over yet. However, two miRNAs remained at significant levels in RNAiD embryos: miR-62, the one endogenous mirtron among the top 100 miRNAs expressed during embryogenesis (which has no obvious function, Miska et al., 2007); and miR-52, a miR-51 family member. Being the overall most abundant C. elegans miRNA, miR-52 appears to be a bona fide canonical miRNA, and the genomic context does not obviously hint at any alternative processing mechanisms. However, the rather unique resistance of miR-52 to Microprocessor depletion in our systems represents an intriguing entry-point for potential follow-up investigations.

Our lab is in the process of investigating mRNA-levels in various miRNA-deficient backgrounds. What we can share so far is that in 2-cell embryos (where the mRNA content reflects the maternal contribution) there is little, if any, difference in mRNA levels between wild-type and Microprocessor-depleted embryos. This is in line with observations that miRNA-mediated silencing in the C. elegans germline may function primarily via translational repression, not by inducing target mRNA degradation (Dallaire et al., 2018, Dev Cell). Thus, we may have to consider looking beyond mRNA levels to understand what the earliest defects in these embryos are. Later, throughout embryogenesis we see misregulation of a number of predicted mir-35 and mir-51 targets in the absence of these miRNAs, but also of several other genes that might lead us to the broader effects of miR-35 and miR-51. Pinpointing the critical targets responsible for the embryonic lethality is rather challenging and something we are diligently working on. There are a number of published functions for both mir-35 and mir-51 family miRNAs, but none of these explain the striking requirement for these miRNAs. At the moment, two projects in our lab revolve around shedding some light on this matter.

The challenge of designing mirtrons for such by-pass experiments is to engineer a pre-miRNA hairpin that allows for efficient splicing, while simultaneously retaining the targeting properties of the miRNA that is to be substituted. We offer a detailed description of mirtron-design in the methods section, which outlines the important considerations regarding critical features. Naturally, the short nature of nematode (and other invertebrate) introns renders them suitable to be readily transformed into mirtrons, as the essential sequence elements required for recognition by the spliceosome are comparably short. Another point that needs to be taken into account is that, for example in Drosophila, some mirtrons are uridylated at the 3’end and this enhances their turnover rate (Reimão-Pinto et al, and Bortolamiol-Becet et al, Mol Cell 2015). However, sufficient levels of mature miRNA may be reached depending on the strength of the promoter driving primary-miRNA transcription. In mammalian cell culture systems, silencing-competent, artificial mirtrons have been introduced (Seow et al., 2012, RNA; Kock et al., 2015, NAR), offering a potential blueprint for similar Microprocessor-bypass experiments in vertebrates. All in all, we think it should be possible to design mirtrons that work efficiently in other species.

We think this is likely to be the case and something we are interested in exploring in the future. The miR-35 family is conserved across Protostomia (including arthropods, nematodes, annelids, molluscs, etc), although some subgroups have lost it (e.g. Drosophila sp.). miR-51 is derived from the miR-10/miR-100 family, the most ancient animal miRNA, present in cnidarians as well as in all bilaterian animals. For now, our goal is to understand their functions in C. elegans, with the hope that this will enable us to move forward in addressing this very interesting question. We think there is still a lot to learn about the evolution of gene regulatory networks that employ miRNA-mediated repression, and the acquisition and loss of essential functions is a very interesting paradigm in which to study this.