Gene perturbation screens have been widely used for identifying the molecular players involved in diverse cellular processes. Pooled screens are particularly powerful, because they are easy to assemble and can be used to probe libraries of more than 105 unique elements. One limitation of this approach is that a perturbation of the cellular process of interest needs to be linked to a simple readout, such as a change in survival, proliferation, or increased/decreased expression of a reporter fluorophore. In the latter case, cells of interest can be enriched using fluorescence-activated cell sorting (FACS). More complex phenotypes, such as changes in the subcellular localization of a protein of interest, requires a high-content microscopy readout and need to be screened using an arrayed format. Arrayed screens are usually nosier, limited to a smaller number of perturbations (in the range of 103-104) and technically more difficult. In an effort to combine the strengths of these two screening approaches, Coukos and colleagues develop a molecular reporter that converts a complex phenotype such as protein mislocalization to a simple fluorescent readout.

HiLITR, the fluorescent reporter presented in this study, includes two components: a GFP-coupled TEV protease and a transcription factor (TF) with a linker region including the protease cleave sequence (TEVcs). Both constructs can be independently targeted to specific subcellular localizations and if they are in close proximity, the activity of the protease releases the transcription factor which can translocate to the nucleus and drive expression of a chosen reporter gene. To better control the activity of the protease, the authors included a photosensory LOV domain, which sterically masks the TEVcs until it is displaced upon exposure to blue light (Figure 1). After showcasing the efficacy of their system by targeting the two components either to the same or two different subcellular localizations (i.e. the outer mitochondrial membrane (OMM), the endoplasmic reticulum membrane (ERM) and/or the cytosol), the authors use HiLITR to discover novel factors controlling the trafficking and membrane insertion of mitochondrial and ER proteins. 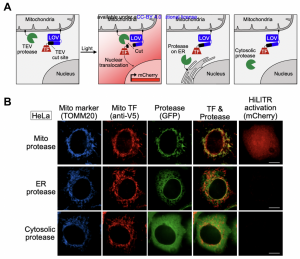 Figure 1 (A) Schematics depicting the HiLITR reporter and (B) fluorescence images of HiLITR in HeLa cells. Only when the protease and the transcription factor are localizing to the same subcellular structure, the transcription factor can be released and drive expression of a reporter gene (i.e. mCherry). Figure is modified from Figure 1 of the preprint, which was made available under a CC-BY 4.0 International license.

Membrane insertion is dictated by the presence of N-terminal (signal-anchor), C-terminal (tail-anchor), internal or multi-pass transmembrane domains in a specific protein. Several distinct, but tightly intertwined pathways regulate the co-translational and post-translational insertion of membrane proteins at the OMM and ERM. Recent studies helped elucidate the mechanisms involved in regulating protein trafficking to mitochondria and ER membranes, but many nodes of these pathways still await to be defined. In particular, the mechanisms controlling insertion of tail-anchored mitochondrial proteins remain elusive. To fill this gap, Coukos and colleagues used HiLITR to performed a genome-wide CRISPRi screen, in which they combine a tail-anchored mitochondrial protease with a signal-anchored mitochondrial transcription factor. Using this design, any genetic perturbation that would affect trafficking and insertion of tail-anchored OMM proteins would cause a reduction in the expression of the fluorescent reporter. Based on the results of the genome-wide screen, the authors designed a smaller library comprising sgRNAs targeting 586 genes-of-interest that was then used in three further screens, which relied on varied localizations of the HiLITR components. This approach allowed the authors to clarify the role of the different hits in mitochondrial- or ER-specific trafficking pathways, but also elegantly exclude false-positive hits that would intrinsically emerge from the initial genome-wide screen.

Reassured by the presence of genes known to be involve in mitochondrial and ER protein trafficking in their hits list, the authors turned their interest to novel genes that might specifically influence the targeting of mitochondrial tail-anchored proteins. Interestingly, only one protein was able to fulfill the most stringent criteria used to cross-evaluate the results of the three independent “validation” screens: SAE1. SAE1 is a member of the SAE complex, which is the only E1 SUMO-activating enzyme present in mammalian cells, and it is strictly required to enable protein SUMOylation. SUMOylation is a widespread post-translational modification, which can alter the interactome or subcellular localization of the target protein, as well as regulate its stability. Following up on this, the authors show that downregulation of SAE1 affects overall stability and mitochondrial localization of three tail-anchored proteins. Importantly, localization and stability of non-tail-anchored mitochondrial proteins are unaffected by SAE1 depletion.

Finally, in one of the three screens performed using the sgRNA sublibrary (the “ER screen”), the protease is present at both the OMM and the ERM, allowing the identification of novel regulators of ER tail-anchored proteins. By examining hits that decreased HiLITR activation in this screen, the authors identified several components of the ER membrane complex (EMC). This result agrees with the role of EMC in promoting tail-anchored proteins insertion in the ER membrane. Differently from other EMC subunits, EMC10 depletion led to increased HiLITR signal, suggesting that this specific subunit plays a role in regulating and/or antagonizing the activity of the ER membrane complex. To corroborate this observation, the authors further demonstrate that depletion of EMC10 results in the mislocalization of the ER-localized protease and the stabilization of the EMC client protein SQS.

What I like about this work and future directions

The HiLITR reporter presented in this manuscript is an elegant way of linking complex phenotypes such as protein localization and trafficking to a simple and robust fluorescent readout, which enables the collection of cells displaying a phenotype-of-interest by FACS. This modular reporter system will therefore facilitate the study of a variety of cellular processes involving changes in protein localization using the power of pooled screening approaches.

You mentioned that several chaperones involved in the deposition of tail-anchored proteins are SUMOylated. Did you investigate whether depletion of these chaperones recapitulates the phenotypes observed upon SAE1 depletion? Were these chaperones identified as hits in the genome-wide screen?

Are MAVS, SYNJ2BP and FIS1 SUMOylated?

If the HiLITR transcription factor were not robustly excluded from the nucleus, it would drive reporter expression independent of interaction with a cytoplasmic protease construct. However, if the transcription factor were contained only in the cytoplasm, reporter expression would be a function of the expression levels of both HiLITR components as well as the duration of light stimulation. Decreased expression levels and light stimulation times could likely provide for a context in which activation would not occur, while increased expression and light stimulation could likely provide for activation even if the TF and protease were not canonical binding partners. We suspect that either circumstance could be arranged with some tuning of the aforementioned parameters.

You mentioned that several chaperones involved in the deposition of tail-anchored proteins are SUMOylated. Did you investigate whether depletion of these chaperones recapitulates the phenotypes observed upon SAE1 depletion? Were these chaperones identified as hits in the genome-wide screen?

We did not directly follow up on the chaperones. However, several were included in the sublibrary screens which were informed by the whole-genome screen. STIP1 depletion decreases HiLITR activation in all three screens. However, STIP1 is not specific to TA proteins, so this result is expected. In contrast to STIP1, the ubiquilins showed neutral effects in all three screens, which is likely a consequence of functional redundancy with each other when only one is knocked down. We speculate that the effect of SAE1 depletion, if indeed mediated through the chaperones, is a result of one of the following possibilities. First, SUMOylation may tune the specificity of chaperones with respect to TA and non-TA proteins. Second, reduced SUMOylation may tax protein trafficking throughout the cell, and TA proteins, which are not locally translated, may be more severely impacted by moderate defects in trafficking.

Are MAVS, SYNJ2BP and FIS1 SUMOylated?

There is some data available on proteome-wide SUMOylation, and these proteins do not appear to be SUMOylated. This data represents a steady-state, and it doesn’t exclude the possibility that these proteins are transiently SUMOylated during maturation and trafficking to the outer mitochondrial membrane. However, we have no reason to believe this is the case, and we suspect that the effect of SAE1 depletion is more indirect.