The T cell receptor (TCR) is expressed on all T cells and is essential for the recognition of antigens presented by MHC molecules. Following antigen recognition, a complex signalling cascade is imitated (reviewed in (1) & (2), Fig. 1) leading to activation of the T cell. 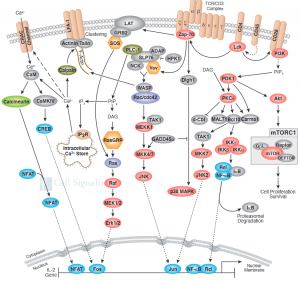 The outcome of TCR signalling is the activation and nuclear translocation of multiple transcription factors, such as NF-κB, NFAT and AP-1 (a complex of JUN and FOS). Although this signalling cascade is relatively well characterised, the outcomes of such signalling have mostly been investigated based on the interactions of these key transcription factors with specific genes. Thus, a more global view of the signalling pathway has been missing. In particular, how TCR signalling affects the accessibility of genes required for T cell functions remains an open question. In this preprint, Yukawa et al reveal that AP-1 is required for the opening of chromatin during T cell activation.

The authors’ first aim was to investigate the extent of chromatin changes across the genome in response to T cell activation. Utilising ATAC-seq, they identified over 16,500 chromatin regions that opened within 60-hours of stimulation. There were a further 6000 regions that closed following stimulation. The authors focussed on the open regions to perform gene ontology analysis. This revealed that the open chromatin was initially near genes that were involved with T cell activation. However, at the later time points, chromatin that is associated with genes involved in T cell migration and metabolism became more open.

These open chromatin regions were thought to be acting in a regulatory capacity. The authors found that 334 of the open regions in activated T cells acted as super enhancers (combinations of enhancer elements with unusually high levels of H3K27 acetylation).

The authors next addressed the question of how this open chromatin is related to TCR signalling.

Utilising software algorithms, the authors found that DNA motifs of NFAT and AP-1 were enriched in the open chromatin of activated T cells. ChIP-seq enabled the confirmation of this observation. Over 70% of open chromatin regions in activated T cells were bound by AP-1 alone or in combination with NFAT. However, a key question remained; Is this remodelling due to direct actions of AP-1 or is AP-1 passively binding to the open regions?

The authors used the AP-1 dominant-negative protein A-FOS to reduce AP-1 levels (A-FOS sequesters JUN isoforms and thereby prevents the AP-1 complex formation). Inhibiting AP-1 reduced the amount of open chromatin regions following activation. Moreover, there was a downregulation of activation-inducible genes such as IFN-γ. Together, this suggests that AP-1 is required for the opening of chromatin.

Partial stimulation of T cells results in anergy, where the T cell becomes inactivated following incomplete stimulation. When the authors partially stimulated T cells, they found a reduction in the number of open chromatin regions and a decrease in H3K27Ac levels. This suggests that the chromatin remodelling is a result of TCR-stimulation and possibly mediated by AP-1.

RNA sequencing approaches have revolutionised the life sciences, with single-cell sequencing now expanding that revolution further. However, there are many layers of regulation surrounding gene expression. Studies that investigate those layers of regulation are invaluable in progressing the field. Chromatin accessibility is hugely important for the transcription or repression of genes, representing one such layer of regulation. Yukawa et al demonstrate that following stimulation of the TCR, T cells rapidly induce opening of chromatin regions which rely on AP-1 signalling.

Thank you for highlighting our work!

Here are the responses to your questions:

Thank you again for your interest in our work, your questions, and the opportunity for additional discussion!

This preprint has now been published in the Journal of Experimental Medicine (http://jem.rupress.org/content/early/2019/10/24/jem.20182009). We would like to congratulate the authors and extend our thanks for their engagement with this preLight. We asked the authors a follow-up question and received the response below.

Q: In your view, what were the most important improvements in your study as a result of peer review?

The reviewers asked us to provide two pieces of data in addition to more browser shots and textual clarifications: