How is chromatin organized in 3D inside the nucleus? A new preprint uses Hi-C and microscopy to show the leading role of heterochromatin-driven phase separation and anchoring to the nuclear lamina in this process 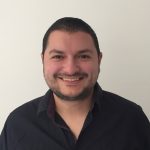 Why is it important?

3D chromatin organization is a key mechanism to regulate gene expression and cell fate. At the megabase scale, the genome is segmented into distinct topological units called domains or TADs; recent work has provided many lines of evidence that a cohesin-based mechanism of loop extrusion is essential for this level of organization. However, how distant regions with similar epigenetic nature interact in the 3D space of the nucleus to form higher-order structures called compartments is still unclear.

In this preprint Mirny and colleagues explore the 3D nuclear architecture of rod photoreceptors, which are characterized by a peculiar inverted architecture with heterochromatin located in the nuclear core and euchromatin in the periphery. With a combination of microscopy and Hi-C based approaches they determined that the segregation into active/inactive compartments appears surprisingly unaffected in rod photoreceptors, despite the inversion evident by microscopy (Figure 1). Using polymer modeling and timecourse experiments they were able to show that compartmentalization in the nucleus is driven primarily by heterochromatin regions and surprisingly does not depend on interactions with the lamina or contacts between euchromatin regions. These results indicate that the inverted morphology of rod photoreceptor cells represents the default state of chromatin organization and additional mechanisms, such as the lamina anchoring of heterochromatin, are necessary to obtain the 3D nuclear architecture evident in most eukaryotic cells. 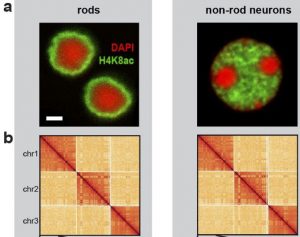