By Gautam Dey and Carmen Adriaens

Interphase cell nuclei are compartmentalized into loose, transcribed euchromatin and compact, largely untranscribed heterochromatin. The consensus is that for a given gene to be transcribed, the active chromatin needs to decompact further through changes in the chromatin landscape. Another form of chromatin dynamics occurs during cell division. Indeed, to divide correctly, the DNA is neatly folded into an extreme state of compaction (the mitotic chromosome) after replication. In two recent independent studies, researchers have used a two-color live cell reporter system to study chromatid separation before and chromatin compaction during mitosis, and the process of decompaction upon transcriptional activation. Since the experimental setup is very similar, we will discuss these papers jointly and highlight the different insights obtained from this live cell imaging system.

At a specific site in the genome, a lactose operon array (LacO) is integrated in the DNA. The repeats can be recognized by the Lac inhibitor protein (LacI), which is here overexpressed and tagged with a green fluorescent protein (GFP) to be visualized as a single dot per lacO in the cells. At another site in the DNA, a Tet operon, TetO, is integrated and its cognate protein (the Tet repressor, TetR) is tagged and visualized with the red fluorescent reporter mCherry. The two dots (green and red) can be followed using microscopy in live cells, to enable the monitoring and modeling of chromatin dynamics at high resolution in real time in different biological settings. 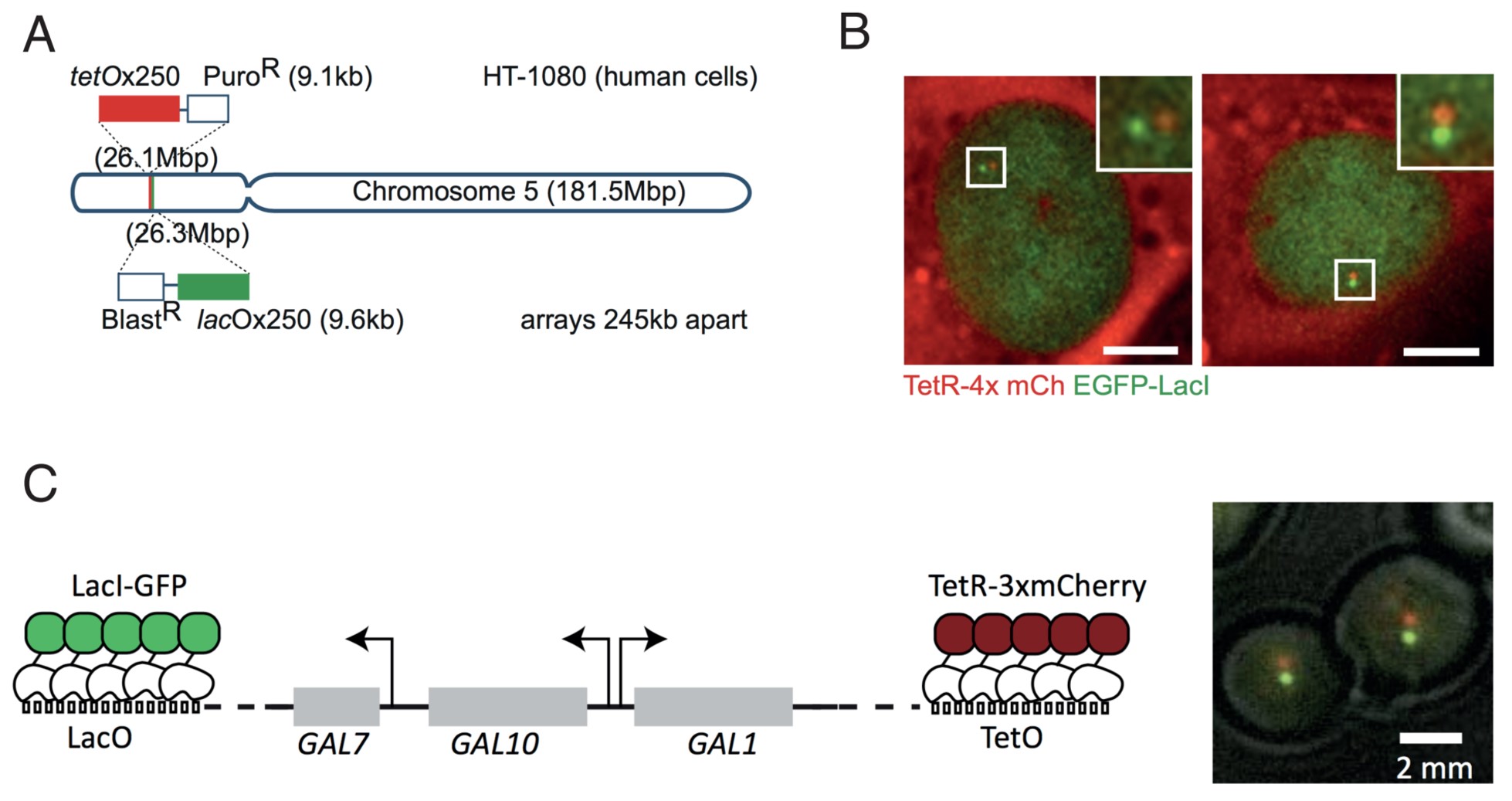 What are the papers about?

Eykelenboom et al. used CRISPR to integrate the Tet and Lac operator arrays separated by a 250 kb interval on one arm of chromosome 5 in HT-1080 human cells. Adding in a 4x-mCherry-tagged Tet repressor and an EGFP-tagged Lac repressor enabled them to follow dynamics of chromatid segregation and compaction throughout the unperturbed cell cycle in single cells. Imaging the 2 green and 2 red spots, representing the chromatids after replication, revealed 4 discernible states: non-resolved, partially resolved, resolved and compacted.

Surprisingly, cells begin to cycle between the partially resolved and unresolved states rather early in G2. This cycle is driven by an apparent antagonism between cohesin holding chromatids together on one hand, and WAPL trying to remove cohesin from the chromosome arms on the other. Exploiting a fortuitous side effect of the integration sites of their operator arrays, the authors showed that the timing of separation depends on the local cohesin concentration. Inhibiting topoisomerase II activity, and thereby preventing the resolution of DNA catenanes, caused partially resolved chromatids to revert to the unresolved state early in mitosis. Finally, the authors showed that condensin II depletion caused defects in sister chromatid separation, while condensin I depletion affected only the final compaction stage.

In a second paper, Dultz and colleagues used very similar experimental principles to study chromatin decompaction upon transcriptional activation. The authors integrated the LacO and TetO repeats on either side of the budding yeast GAL locus and studied chromatin dynamics by measuring distances between red and green dots in different conditions. In the absence of glucose and galactose, the locus is inactive, but derepressed. In the presence of glucose, the locus is actively repressed. In both scenarios, the distance between the dots was small, reflecting an inactive chromatin state. When, on the other hand, the cells were grown in or induced with galactose, the locus became highly active and the 3 linked genes (GAL7, GAL10 and GAL1) in the locus became transcribed. In this active state, the green and red dots lining the GAL locus on either side reversibly increased in distance, reminiscent of decompaction and transcriptional activation.

Next, the authors asked whether these observations are dependent specifically on either spatial or linear decompaction. Spatial decompaction is primarily mediated by post-translational modifications of the histones and hence manipulation of nucleosome-nucleosome interactions, whereas in linear decompaction the wrapping density changes through eviction and remodeling of nucleosomes at the site of transcription. They found that a change in histone modifications, and, by extension, inter-nucleosomal interactions, does not dramatically alter the decompaction dynamics. Conversely, both manipulation of transcription itself and nucleosomal density do.

These observations led to the hypothesis that decompaction of chromatin is principally mediated by the number of nucleosomes evicted. To test this, the authors set up an exogenous reporter system 10 kb upstream of the original locus and measured changes in distances between dots when no, one, or two open reading frames were present. In this way, they found that the extent of decompaction indeed correlates with the length of the transcribed region. Finally, the authors concluded that although decompaction is transcription dependent, the inverse isn’t necessarily true: cells can continue to transcribe the GAL locus even in the absence of significant changes in distances between the two reporter dots.

Takeaways and questions for the future

It’s a very exciting time for the field of chromatin reorganization and dynamics! To take just one example, new experimental approaches have validated an old molecular model for condensin function1 and mapped a pathway to mitotic chromosome organization mediated by condensin I and II2. In parallel, a proliferation of live cell reporters have uncovered layers of cell cycle regulation that were hitherto invisible to bulk assays3,4. Taken together, these advances represent the perfect storm to preface an analysis of chromosome dynamics in single cells as they progress through the cell cycle.

The most surprising finding from the first paper (Eykelenboom et al.) is that chromosomes cycle between unresolved and partially resolved states through most of their G2 phase, driven by an apparent concentration-dependent antagonism between cohesin and WAPL.

What then is the purpose of this (futile?) cycle, and how is it broken during prophase? Saturated feedback loops of this type can be used to generate switch-like responses (also termed zero-order ultrasensitivity5). In turn, then, one could ask: is it necessary to have a switch-like transition between unresolved and resolved chromatids during prophase?

Moreover, the authors’ observations complement other recent work2 helping to resolve long-standing questions in the field about the individual and collective roles of the two condensin complexes.

It has long been recognized that actively transcribed chromatin is less compact than inactive chromatin, and much is known about the packaging and histone modifications responsible for these states. However, being able to visualize actual decompaction directly in live cells is impressive: Dultz et al. leverage the ultra-simplicity of the experimental setup to reveal the solution of the chicken-and-egg problem of loose chromatin during transcription.

Yet, there may be some caveats to these experiments as well: because the GAL locus is highly active when growing in galactose and the regulation of the system is rather unique compared to the rest of the yeast genome (ON/OFF), these observations may confer a local rather than a global rule. The physical decompaction (i.e. the increase in physical distance between the two arrays) in other loci may not be as striking as here, and will potentially be more difficult to study.

Furthermore, we note that both studies employ population averaging to draw certain conclusions, faced with high levels of cell-to-cell variability. Other recent work6 shows that chromosomal contacts observed by high-throughput sequencing approaches such as Hi-C occur as infrequently as in ~10% of cells only (as observed by microscopy), highlighting the extraordinary differences even within relatively homogenous or synchronized populations of cells. Additional work will be required to understand the sources of this variability and its functional consequences, if any.