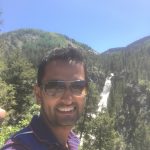 The mammalian brain is made up of millions of interlinked neuronal circuits that form through specialized junctions known as synapses. Localized protein synthesis in neurons is an important mechanism which influences synaptic strength and plasticity. Thus, control of localized protein synthesis and degradation at synapses is an important mechanism underlying memory and learning (1).

Using fluorescence in situ hybridization (FISH) with poly-dT probes in combination with expansion microscopy, the authors demonstrate that >80% of pre-synaptic inhibitory and excitatory boutons contain poly-adenylated/poly(A) mRNA. The presence of poly(A) mRNA in axon terminals suggests the capacity for protein synthesis.  Indeed, the authors also show the presence of the 28S ribosomal RNA (rRNA) and ribosomal protein RPS11 in excitatory and inhibitory axonal boutons,         demonstrating the presence of the translational machinery in pre-synaptic nerve terminals.

The authors used fluorescence-activated synaptosome sorting (FASS) to purify fluorescently labeled synaptosomes from the forebrain of vGLUT1VENUSknock-in mice (2). These synapotosomes contain resealed  ‘intact’ presynaptic compartments and RNA sequencing revealed >150 unique mRNA transcripts in vGLUT1+synaptosomes. There was an over representation of genes coding for ribosomal proteins and regulators of translation indicating localized synthesis of translational components is likely in presynaptic terminals. Amongst the most enriched transcripts in the vGLUT1+presynaptic transcriptome were mRNAs for well-known presynaptic proteins, including Bassoon, Rims1 and Rims3.

This is the first study, to the best of my knowledge, which uses expansion fluorescent microscopy to distinguish between RNA molecules present in pre- and post-synaptic compartments. Furthermore, they utilize state of the art purification methods to isolate synaptosomes and identify RNA species within them.  The techniques utilized in this preprint demonstrate the ability to monitor local translation at unprecedented spatial resolution and could revolutionize the way we study protein synthesis in neurons.

The elegant methods used in this preprint could be used to answer a plethora of interesting questions, including but not limited to: