Actin and tubulin are major components of the cytoskeleton that can polymerise into microfilaments to perform a plethora of functions in the life of a cell. Both are well-understood to be regulated by their inherent assembly and disassembly dynamics and by interactor proteins. Fundamental properties of these cytoskeletal elements have been revealed through in vitro assays where the source of pure actin and tubulin is generally animal tissue such as muscle or brain.

An important factor contributing to cellular properties of tubulin and actin proteins, and often unaccounted for in vitro, is their post-translational modification (PTMs). In recent years we have made progress in elucidating how both actin and tubulin can be post-translationally modified. For example, the microtubule detyrosinylation enzyme was only recently identified (1, 2). Here we focus on actin modifications.

All known actin PTMs are highly species and cell type-specific. Therefore, actin used from animal tissues for in vitro assays either contain monomers with mixed or highly limited PTMs. This greatly restricts our understanding of actin behaviour in different organisms and of the most commonly found cytosolic actin.

Six isoforms of actin are known and they can be post-translationally modified in many ways (3). Though these isoforms are highly similar they have unique N-termini that are subject to modification. Human cytosolic b and g actin isoforms undergo a multistep maturation process. The initiator methionine is removed, and the following aspartate or glutamate residue is frequently acetylated or arginylated. As the actin N-terminus is highly acidic, these PTMs dramatically affect the charge of this region. Moreover, the N-terminus of both monomeric and filamentous actin is exposed on the surface, which suggests that these modifications very likely impact function.

In 2018, Hatano et al developed a method to cost-effectively purify heterologous actin and arginylated actin in large scales by expression in the methylotropic yeast P. pastoris; another feather in the cap of this powerful protein production host system (4, 5). However, the full suite of isoform-specific actin PTMs was still unavailable in biochemically pure form.

Solving long-standing mysteries, key enzymes involved in post-translational processing of actin have been recently identified. NAA80 was revealed to be the N-terminal acetyltransferase that completes N-terminal maturation of actin (6, 7). Meanwhile SETD3 is the methyltransferase that methylates actin at histidine 73 (8, 9). Taking advantage of these findings, in this preprint Hatano et al expand the scope of their protein expression method to purify actin tailored with specific and combinatorial PTMs.

The central approach in their methodology is to express in P. pastoris a quadruple fusion construct of ubiquitin followed by the desired actin isoform (without the initiator methionine) followed by the human thymosinb4 gene with 8 His residues at the C-terminus. The His-tag permits purification of the protein. The thymosinb4 forms an intramolecular interaction with actin preventing polymerisation of this monomer. A natural, conserved phenylalanine residue at the C-terminus of actin allows cleavage of thymosinb4 by addition of chymotrypsin at a desired time. The ubiquitin moiety is cleaved by an endogenous protease leaving the N-terminal residue of actin accessible for modification. 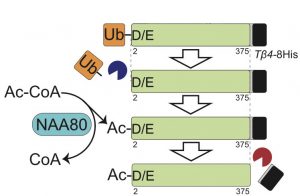 To acetylate the N-terminus of the expressed actin, NAA80 enzyme was co-expressed. Alternately or in combination, by co-expressing the SETD3 enzyme, the authors could also successfully purify actin methylated at position 73. The presence of the resulting PTMs was confirmed by mass spectrometry and purified actin monomers were demonstrated to polymerise normally in in vitro assays.

Using these approaches human b and g actin of the following forms were produced with good yields (a) unmodified (b) N- Asp/Glu acetylated (c) N-arginylated (d) His 73-methylated and (e) N- Asp/Glu acetylated; His 73-methylated. Additionally, this method was expanded to plant actin. An Arabidopsis isoform was expressed that was N-Ala acetylated (by an endogenous P. pastoris enzyme) and/or methylated at His 74 by exogenous SETD3.

This study resolves a major obstacle in the field of actin biology with an easy methodology that other labs could readily adapt and use, provided the modifying enzymes are known and readily expressed. I look forward to the first in vitro assays that characterise these specific, modified actin isoforms in detail.