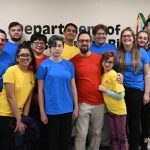 Multicellular tubulogenesis is largely mediated by intraluminal forces, such as hydrostatic pressure, and/or apical extracellular matrix (aECM) factors that are secreted into the intraluminal space. The aECM is believed to act either like a reservoir for water molecules to promote the expansion of the lumen, or to assemble into specialized structures called fibrils that shape the lumen. Caenhorhabditis elegans is one of the few model organisms in which tubulogenesis can be studied in vivo with unprecedented resolution. In C. elegans, the intestine (Leung et al. 1999), excretory canal (Sundaram and Buechner 2016), and vulva (Estes et al. 2009) have all served as models for studying mechanisms of lumen formation. Cohen et al. vastly augment our understanding of vulval tubulogenesis by exploring a previously uncharted territory—the vulval luminal matrix—via confocal and transmission electron microscopy. This preprint reveals the spatiotemporal dynamics of the aECM within this luminal matrix and along the vulval tube, as well as the molecular factors that make up the aECM, including chondroitin proteoglycans and sheath matrix proteins.

To understand the differences between the matrices produced between primary (1°; vulE and vulF) and secondary (2°; vulA, vulB1, vulB2, vulC, and vulD) vulval cell types, the authors analyzed changes in the localization of sheath matrix proteins in lin-12/Notch gain-of-function (lin-12(d)) and loss-of-function (lin-12(0)) mutants. lin-12(d) mutants have only 2° cell types, while lin-12(0) have only 1° cell types (Greenwald et al. 1983; Sternberg and Horvitz 1989). Both lin-12(0) and lin-12(d) mutants have misshapen vulval lumens, suggesting that each vulval cell type recruits essential chondroitin proteoglycans and sheath matrix proteins to their surfaces. The authors found that lin-12 mutants had changes in the localization of zona pellucida (ZP) domain proteins. For example, they found that LET-653(ZP), a shortened form of LET-653 containing only the ZP domain, bound to all apical surfaces in lin-12(0) mutants, but to none in lin-12(d) mutants. Conversely, they found that NOAH-1 was strongly absent from the apical membranes in lin-12(0) mutants but was strongly bound to the dorsal-most apical surfaces in lin-12(d) mutants. It was also found that both lin-12(0) and lin-12(d) lack core fibrils. Therefore, 1° and 2° cell types recruit different sheath matrix proteins to their apical surfaces, which attaches to the core fibrillar network needed for completion of vulval tubulogenesis.

Cohen et al. introduced the importance of sheath matrix proteins in the later stages of vulval morphogenesis. The initial assessment of fibrillin-related protein, FBN-1, localization showed its loss from the lumen over 1° vulval cells during vulva eversion. Further observation of fbn-1 mutants demonstrated normal vulval morphogenesis until the mid-L4 stage. However, at later L4/adult molt stages, the mutants had improper vulva eversion where vulA and vulB1/B2 cells formed abnormal bulges. These findings indicate that FBN-1 functions predominantly in vulval eversion rather than inflation, thus confirming the diverse roles of chondroitin proteoglycans in vulval shaping.

Through examination of double mutants for mig-22, which encodes a chondroitin sulfate synthase, and the sheath matrix factor, let-653, the authors show that the relationship between these proteins changes over time. Specifically, they find that initially, antagonism between the two proteins exists, with MIG-22 promoting lumen inflation and LET-653 restraining it. However, later in vulval development, they function cooperatively to restrict expansion of the dorsal-most region of the vulval lumen and to promote vulval eversion and cuticle formation. Taken together, these results demonstrate that the roles of aECM factors can be highly context- and time-dependent, allowing for regulation of the balance between expansion and constriction forces to properly shape the vulva.

Cohen et al. elegantly show that vulval tubulogenesis relies on dynamic cellular events that cooperate together in a spatial and temporal fashion. Vulval tubulogenesis initially depends on chondroitin proteoglycans, such as FBN-1, that form a granular matrix, which promotes lumen expansion (A). In a cell-type specific manner, sheath matrix proteins, such as LET-653, are then temporally assembled and disassembled on the apical surfaces of each mature vulval cell (B). Next, a core fibrillar structure within the center of the vulval lumen attaches to the sheath matrices, via ventrolateral fibrillar structures, generating the forces needed to shape the vulva (C). Lastly, the lumen narrows into a slit that is lined by cuticle (D).

Why we chose the preprint

This preprint is an excellent example of the strengths of C. elegans as a developmental model organism. Its invariant cell lineage, highly stereotyped progression of vulval morphogenesis, and visual amenability allowed for this beautiful study of aECMs during vulval lumen formation. The authors use a combination of endogenous translational reporters and confocal microscopy to visualize the dynamic expression and localization of aECM proteins, specifically comparing the expression patterns between two subtypes of vulval cells: 1˚ and 2˚ fated. Furthermore, using alternative tissue fixation methods paired with transmission electron microscopy (TEM), the authors reveal ultrastructural morphology of preserved aECM structure with unprecedented detail.

How this work moves the field forward

This study expands upon previous work showing the relationship between the pushing forces of chondroitin and constricting forces of actin-myosin by 2˚ vulval cells to expand the vulval lumen. The study introduces new strategies for quantifying vulval lumen dimensions, which can be further adapted to measure other lumen types, and uses high pressure freezing and freeze substitution methods to observe and analyze the ultrastructural features of the vulval luminal matrix. Importantly, this study visualizes the dynamic localization of aECM factors in a cell-type dependent fashion and shows how the expanding and constricting properties of these factors combine together to shape and mold the vulval into its mature form.

Overall, the work done in this preprint establishes the vulval lumen as a powerful model for understanding lumen formation and for studying the aECM using modern cell biological and genetic approaches paired with live-cell imaging. This work is also exciting in that it sets the stage for future studies that can further bridge the link between the gene regulatory networks (GRN) that control cell specification, such as those that involve lin-11 and lin-29 (Ririe et al. 2008), and the tissue remodeling events that lead to morphogenesis, which may include the expression of specific aECM modules—in some ways reminiscent of a “hox-code” for aECM within a defined lineage. It will be fascinating to see if lumen aECM is patterned using similar mechanisms in other tissues and taxa.

During your summary of uterine-vulval morphogenesis at the beginning of the results section, there’s a set of three papers about the cellular mechanisms that mediate basement membrane gap expansion that might be nice to include to fill in the gap between the vulval cue and toroid formation, as it is written now. Also, just as an aside, the primary VPCs don’t need to divide to release the cue, they just need to be specified as primary (if you arrest them they still make the cue). This work came from the Sherwood lab during and shortly after my postdoc in in the lab. In Ihara et al. 2011, they showed that the D cell holds onto the basement membrane in an integrin-dependent fashion, limiting the size of the expanding gap. In Matus et al. 2014, we showed that the D cell exits one round of division before all the other VPCs in an evolutionarily conserved fashion—it never divides in all rhabditid nematodes surveyed to date (>50 species!). In that paper, we also suggest that it is the terminal division of the E and F cells that helps open up the gap, if you prevent that terminal division, then they hold onto the BM. Finally, we showed that integrin is likely functioning through laminin to facilitate D cell-BM adhesion. After I left the Sherwood lab, they published a beautiful paper, McClatchey et al. 2016, where they tease out the uterine cell mechanism for controlling the BM gap, via Notch-dependent dystroglycan regulation.

Response: Yes, these are all great papers! We were trying to be succinct in the background but we will try to get a little more detail in there. I did notice that some integrin manipulations can give a phenotype not unlike the mig-22;let-653 double mutant appearance. There are certainly going to be both basement membrane-derived forces and apical matrix forces acting in concert to shape that dorsal lumen.