A dive into the gene regulatory logic of neurons, thanks to a single cell chromatin accessibility atlas of the mammalian brain. 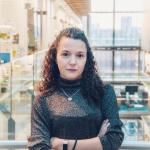 The mammalian cerebrum (or telencephalon) is the largest part of the brain and is constituted of the cerebral cortex and subcortical structures (i.e. hippocampus, basal ganglia and olfactory bulb). It performs fundamental cognitive functions, such as sensory processing, motor control, emotion and cognition. The predominant cell types in the cerebral cortex and basal ganglia are excitatory projection neurons and inhibitory interneurons, as well as glial cells. The molecular complexity of mammalian brain cells has been described in great details at the transcriptional level, with several transcriptomic atlases generated in recent years [1]. However, the gene regulatory regions of most brain cell types remain to be investigated. Deciphering the epigenetic landscape of the mammalian cerebrum is a fundamental step to further understand how the identity and function of brain cells are established during development. Besides, brain cells’ transcriptome and epigenome are dynamic and can also be modified by environmental factors, such as electrical activity, in a cell-type specific manner [2]. Thus, dissecting the gene regulatory landscape at the single-cell level in the brain is instrumental for understanding the molecular changes occurring downstream of neuronal activity and/or environmental changes.

Key elements that define the brain regulatory landscape are enhancers, which are short sequences of DNA with defined epigenetic features, such as open chromatin, specific histone modifications and DNA hypomethylation. An enhancer acts as a docking site for DNA-binding transcription factors (TFs). The combinatorial binding of TFs at a given enhancer promotes gene transcription. The presence of cell-type-specific TFs together with a cell-type unique epigenetic landscape ensures a cell-type-specific transcriptional activity. How enhancers, along with other regulatory elements (e.g. promoters, insulators), regulate neuronal gene expression has been recently nicely reviewed [3].

Li and colleagues [4], as part of the BRAIN Initiative Cell Census Network, have used single nucleus ATAC-sequencing (snATAC-seq) to decipher the transcriptional regulatory landscape of the whole mouse cerebrum at unprecedented resolution.

The cortex, olfactory bulb, hippocampus and cerebral nuclei of 8-week-old male mice were dissected in a total of 45 regions, and single nuclei were processed for snATAC-seq. With more than 800,000 nuclei sequenced, this is the largest chromatin accessibility brain atlas at single-cell resolution.

The open chromatin landscape profiles were used to cluster and annotate cell types in the brain. A total of 43 major cell types were identified, including distinct layer-specific cortical neurons, hippocampal granular cells and striatal D1 and D2 medium spiny neurons. Iterative sub-clustering revealed 160 neuronal sub-types (e.g. Lamp5+ neurons and SST+ neurons), resolved by annotation of known marker genes. To identify open chromatin similarities and differences among the 43 major cell groups, the authors performed hierarchical clustering of the open chromatin profiles. Hierarchical organization of the open chromatin-based clustering is in good agreement with transcriptomics-based clustering, thus both profiles are good predictors of cell identity. Neurons are found separated from non-neuronal cell-types, and they are further segregated based on their neurotransmitter types (GABAergic versus glutamatergic), with specific neuronal subtypes also identified. The authors speculate that the developmental origin of cell types might influence vicinity in the hierarchal clustering.

Single nucleus ATAC-seq profiles were aggregated from the nuclei of each of the 160-cell clusters and such aggregated data was used to identify the candidate cis regulatory elements (cCREs) of each neuronal subtype. A step-by-step description of the bioinformatic pipeline used for cCRE identification and annotation is well explained in the text. A total of 491,818 cCREs were identified across the 160-cell clusters. Only 8,188 of the identified cCREs were present in all cell clusters, while the remaining 483,630 cCREs were highly variable. To associate cCREs to putative target genes the open chromatin profiles were integrated with the correspondent transcriptional profiles [5]. This analysis revealed 86,850 putative enhancers associated to 10,604 genes, with a median distance between a putative enhancer and target gene promoter of 178,911bp. Interestingly, for each gene an average of 7 putative enhancers were identified, suggesting cell-type specific enhancer usage for driving common gene expression.

cCREs were further classified to investigate how putative enhancers may direct cell-type specific gene expression. 38 modules were identified and transcription factor binding motif enrichment was performed for each module to predict potential cell-type regulators. cCREs in module M1 are present in both glutamatergic and GABAergic neurons, and absent in glial cell types. TF motif enrichment found CTCF, RFX and MEF2. Interestingly, CTCF transcription factor not only regulates 3D chromatin structure but has been also linked to neurogenesis [6],[7]. RFX family of transcription factors and MEF2 are known regulators of synaptic transmission pathways. Additionally, TFs associated with extrinsic signaling pathways were also found to be enriched. Among them, CREB is known for its role in neuronal activity dependent gene regulation, NF-KB is associated with stress-response, and STAT3 relates to interferon signaling.

Around 90% of non-coding variants associated with human diseases map to non-coding regions. Thus, information about cCREs is essential to better predict the role of non-coding variants in the pathogenetic phenotypes. Human orthologs of the mouse cCREs were retrieved and used for the association of different brain regions and neuronal cell types with risk variants for neurological diseases and traits. This analysis showed that some neurological traits, such as attention deficit hyperactivity disorder, autism spectrum disorder and insomnia were associated with specific neuronal cell-types in the cerebral nuclei and hippocampus. Disease specific patterns were described for various human disorders, which have not been appreciated before from bulk chromatin maps. For example, Schizophrenia risk variants were found enriched in cCREs of excitatory neurons, as well as of specific inhibitory neuron subtypes.

Li and colleagues have dissected for the first time at single cell resolution the chromatin accessibility landscape of the entire murine cerebrum. This paper has a detailed description of the logic used for snATAC-seq bioinformatic analysis, which is an additional great resource for scientists wanting to embark on a similar project. This atlas is a fantastic resource to dive into, helping to understand the logic of gene regulation in individual brain cell populations http://catlas.org/bil022/catlas/#!/home.  The enhancers here identified are an invaluable resource to tag individual neuronal cell types, allowing for purification and/or tracking of pure neuronal populations. Thus, I believe this paper will be of high impact for the neuroscience and developmental biology communities.

1.     I was wondering if there are any differences or unique features between common neuronal enhancers and cell-type-specific ones.

2.     Can the authors speculate about any possible logic underlying differential enhancer usage for the same gene in different cell types? I am curious to know if completely different TFs are engaged to drive the expression of a gene in different neuronal cell types, or if TFs are the same but they are recruited to different available enhancer sites.

3.     Do the authors have a feeling for what could be the similarities and differences of the murine brain chromatin landscape compared to the human one? If any speculations can be drawn at this stage.

4.     Would it be feasible to integrate this data with chromatin conformation maps to better predict enhancer-promoter interactions?