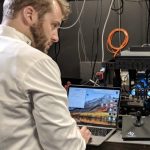 Since the development of super-resolution microscopy, the holy grail has always been to be able to resolve structures at the molecular level and provide a complementary approach to electron microscopy techniques such as Cryo-EM. Although it is now possible to obtain resolutions down to 30-40 nm with techniques like (d)STORM (direct Stochastic Optical Reconstruction Microscopy) and STED  (stimulated emission depletion), achieving actual molecular resolution would require resolutions of the order of a few nanometers. Only very few light microscopy techniques have demonstrated this level of resolution, such as MINFLUX [1] requiring a very complex optical system or COLD [2] requiring cryo-temperatures. Although extremely powerful in their specific implementations, both of these techniques are extremely complex to implement in standard biological labs.

In recent years, ExM (expansion microscopy) [3] has opened up new possibilities by demonstrating that the sample itself can be isotropically expanded in order to resolve finer details about its structure. This is achieved by embedding the sample with a polyelectrolyte hydrogel, anchor the molecules of interest to this gel and then make the gel swell by the addition of water. One key advantage of the approach is that it can be combined with other super-resolution techniques like STED and SIM (structured illumination microscopy), therefore adding on the resolution improvements of these techniques. Recently, the research teams of Virginie Hamel and Paul Guichard (University of Geneva, Switzerland) and Markus Sauer (University of Würzburg, Germany) showed a powerful demonstration of a novel protocol of ExM, named U-ExM and its combination with STED and deconvolution microscopy [4]. This paper showed an impressive resolution of the centriole chirality from Chlamydomonas.

However, combining ExM with one of the highest resolution methods, namely dSTORM [5], remains a challenge. First, dSTORM is a technique based on single-molecule localization which requires the use of specific photoswitching buffers, which induce the blinking behaviour of fluorescent labels necessary for single-molecule detection. These buffers are highly charged and interact with commonly-used ExM gels, preventing them from swelling. Second, the expansion of samples naturally dilutes the density of labelling, this can therefore dramatically limit the quality of SMLM images typically achievable.

Key findings of the new preprint

In this preprint published on bioRxiv by the teams that developed U-ExM, Fabian Zwettler et al. cleverly resolved both the issue of buffer compatibility and sample labelling density. They solved the buffer/gel compatibility by re-embedding the ExM gel into a second uncharged gel matrix, which therefore interacts less with dSTORM buffers. Secondly, they exploited and developed post-labelling ExM protocols to be able to maximise label density and retention. The result is an elegant demonstration of a new combination of techniques previously unachievable, which they called Ex-SMLM.

By being able to label many molecules and localize with high precision the fluorescent molecules using dSTORM, the authors were able to observe and quantify an important effect at these scales: the loss of localization accuracy due to linker size. The linker size represents the distance between the actual molecule of interest (say a molecule of alpha- or beta-tubulin if you want to resolve microtubules) and the fluorescent marker that is attached to it and which is the one that is actually observed experimentally.

Post-labelling ExM protocols minimize this effect by adding the label only after the sample has been expanded, thereby avoiding expansion of the linker and thus the loss of localization accuracy due to increased linker size. This is particularly important as otherwise the gain in resolution brought by dSTORM is virtually lost by the expanded linker size.

The authors demonstrate that expansion can be successfully coupled to dSTORM using the post-labelling strategy of U-ExM and re-embedding in an uncharged gel to prevent shrinking induced by the photoswitching buffer. With this approach Zwettler et al. show that structures like centrioles can be visualized with high molecular precision.

This work brings the community one step closer towards resolving molecular structures and assemblies with super-resolution microscopy. It directly tackles and quantifies the effect of linker size as well as provides tools to quantify it on microtubules. The two techniques described and combined here, namely SMLM and ExM, are arguably the easiest to be implemented by a wide range of labs and therefore makes the approach very much within reach of many biology-oriented labs.

Response from the authors:

Q1: “Indeed, it is possible to adjust the refractive index of the re-embedded hydrogel by altering the composition of the second gel. After re-embedding, the hydrogel is not completely transparent due to the refractive index mismatch between the expanded hydrogel and acrylamide gel. We tested several gel compositions for their opaqueness, ability to stabilize the hydrogel reliably and homogeneously and allowing antibodies to diffuse through the polymer network post re-embedding. When using a higher crosslinker concentration of the re-embedding gel with e.g. 10% acrylamide, 0.5% bisacrylamide, 0.05% APS, 0.05% TEMED, 5mM Tris-Base, the re-embedded hydrogel becomes more opaque already visible by the naked eye. Thus, we adjusted the crosslinker concentration to 0.15%, which minimizes the scattering of light in the gel. We think that changing the refractive index in the direction of the oil index could be disadvantageous, since it could lead to increased light scattering and thus adversely affect the quality of the dSTORM measurement. In conclusion, even though we do not see the possibility of using oil objectives for ExSMLM, we believe that the reduced fluorescence background due to the nearly transparent hydrogel and other advantages resulting from the expansion process (including increased epitope accessibility, reduced linkage error and increased label density) allow for high quality dSTORM images.”

Q2: “In our opinion, it is theoretically possible to visualize for instance the heterodimer molecules alpha and beta of a tubulin filament or similar biomolecules at a molecular level using ExSMLM. In theory, Ex-SMLM can achieve a spatial resolution of only a few  nanometers. However, the limiting factor is still the use of overly large fluorescent probes such as antibodies or chemical tags. Intrinsic labelling methods, such as click chemistry, could therefore become an option in the future. In addition, insufficient homogeneity of the polymer network of the hydrogel in the range of single molecules could lead to errors caused by the physical expansion. However, progress has already been made in this area, for example through the use of a highly homogenous polymer composed of tetrahedron-like monomers by Boyden and coworkers. Therefore, we are confident that further improvement of the ExM method and labelling techniques will very soon enable the visualization of individual molecules using fluorescence microscopy.”

This preLight highlight was selected and written by Emma Touizer and Romain F. Laine.

Tsetse salivary glycoproteins are modified with paucimannosidic N-glycans, are recognised by C-type lectins and bind to trypanosomes