John G. Lock and colleagues identify a novel class of adhesion structures that persist during mitosis and contribute to mitotic cell adhesion. 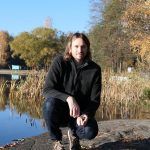 The ability of cells to adhere to their surrounding extracellular matrix is a fundamental feature of metazoan life and cell adhesion regulates virtually every cellular processes including cell proliferation, cell differentiation and cell migration. Loss of cell adhesion often triggers cell death by anoikis. Cell adhesion is classically mediated by adhesion receptors including integrins which connect the extracellular matrix to the intracellular actin cytoskeleton via the recruitment of large cytoplasmic platforms termed adhesion complexes. These adhesive platforms contain a large number of proteins including paxillin, talin and vinculin. During the cell division process, most cells will disassemble these adhesive structures and round-up but remain attached to their substrates via long actin cables. These actin cables serve as a template for the two daughter cells to spread when division is completed. However how these actin cables remain tethered to the substrate during mitosis remained a mystery.

John G. Lock and colleagues1 identified a novel adhesive structure termed reticular adhesions, that are assembled during metaphase and persist during mitosis, and contribute to mitotic cell adhesion. Using a combination of quantitative imaging and mass-spectrometry, the authors define the composition of these reticular adhesion and revealed that these adhesions are rich in integrin β5 but are devoid of most of the typical components found in classical adhesion complexes. Instead, reticular adhesions are enriched in proteins directly or indirectly binding to the phospho-inositide PI(4,5)P2 such as the endocytic adaptors AP2, DAB2 and NUMB. The authors also report that, during interphase, reticular adhesions are disconnected from the actin cytoskeleton. Disruption of these adhesions (by interfering with integrin β5 expression) leads to mitotic defects and loss of spatial memory during re-spreading.

The discovery made by John G. Lock and colleagues is very exciting as it opens a plethora of novel research avenues in a field where the same molecules have often been studied repeatedly. Below is a list of open questions that I particularly find exciting.

1. What is the role of these structures during interphase?

The authors report that reticular adhesions are prominent during interphase but their functions outside of mitosis remain to be addressed. One key feature of classical adhesion complexes are their ability to exert force and sense stiffness. Could reticular adhesion also be mechanosensitive?

Recently, Elkhatib et al reported that β1 integrin contained in AP2 clathrin lattices contributed to cell migration in 3D collagen outside of its role in classical focal adhesions 2. The reticular adhesions described here are also rich in AP2, clathrin and other endocytosis adaptors. Could reticular adhesions be related to the AP2 lattices described by Elkhatib and colleagues and also contribute to cell migration in 3D environments?

2. Do similar structures exist in vivo?

A key questions that has plagued the adhesion field for nearly two decades is the relevance of adhesive structures observed in 2D to organisms. This is especially important considering that the integrin β5 knockout mouse is viable. Looking for these new structures in vivo and/or in 3D is likely to be of high priority.

3. How do cells stay attached when dividing on non-integrin β5 ligand?

Integrin β5 has a limited ligand binding preference. What are the mechanisms used by cells in environments that contain low amounts or no β5 ligand? Could the answer come from the endocytosis adaptors?

4. How is β5 integrin activity / function regulated in reticular adhesions?

Integrin function is classically modulated by both a conformational shift that regulates receptor-ligand affinity and by intracellular trafficking that determines receptor availability on the plasma membrane. The authors report that most of the classical integrin activity regulators are absent from these reticular adhesions. Interestingly, mass-spectrometry analysis suggest that two integrin activators, talin-2 and tensin-3 3, could be present in these reticular adhesions. In addition several endocytic adaptors were identified. Dab2 and Numb were previously found to associate directly with integrin β5 4, while AP2 was previously found to directly associate with several α integrins 5. Could these proteins or others contribute to integrin β5 function in reticular adhesions?

Similar structures described in breast cancer cells some years ago.