The polyol pathway is a crucial glucose sensor in Drosophila

A pathway by any other name would not smell as sweet: The polyol pathway is a crucial glucose sensor in Drosophila 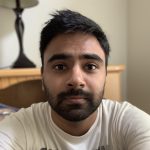 Background: Across species, the consumption of sugars such as glucose is a conserved behavior associated with feeding. Animals possess the ability to metabolize glucose into components that can be leveraged towards state-dependent nutrient storage, energetic needs and metabolic processes. But how are cells within the animal wired to correctly utilize resources when internal nutrient availability is in flux? In mammals, existing work has pointed to nutrient-dependent nuclear localization of transcription factor MondoA/ChREBP in various tissues that induces large-scale changes in expression of lipogenic genes [1,2]. In previous work, the authors identified peptide hormone CCHa2 in Drosophila that responds to glucose in fat body cells and gut by stimulating production of insulin-like peptides (Dilp) in the brain’s insulin-producing cells [3]. However, it remains unclear how circulating glucose may trigger production of CCHa2. The polyol pathway is a metabolic pathway that reduces glucose to sorbitol and converts sorbitol to fructose through aldose reductase and sorbitol dehydrogenase, respectively. Activity of this pathway has been implicated in conditions such as diabetic retinopathy in mammals [4].

In this preprint, the authors identify a role for the polyol pathway as a mechanism for sensing glucose uptake mediated by transcription factor Mondo, the Drosophila homolog of MondoA/ChREBP. Their findings point to two key conclusions, illustrated in their model shown below. First, Mondo has a requisite role in glucose-dependent CCHa2 expression. Second, the polyol pathway acts as a glucose sensor, promoting nuclear localization of Mondo to induce expression of CCHa2 and other important metabolic genes in normal feeding contexts. 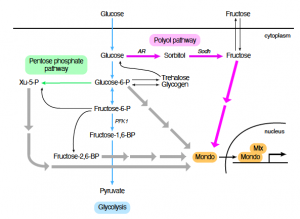 To assess the role of different nutritional conditions on CCHa2 expression levels, larvae were starved for 18 hours (only consuming water), and then allowed to refeed for 6 hours on glucose. Here, the authors reported that CCHa2 expression in Mondo RNAi knockdown larvae was significantly lower than in control larvae, suggesting Mondo controls glucose-dependent CCHa2 expression.

Polyol pathway metabolites and enzymes cause increases in CCHa2Expression

To observe the link between sugar consumption and CCHa2 expression, the authors then fed larvae with different sugars, observing specificity of the glucose-induced increase in CCHa2 mRNA. They found that fructose and sorbitol also yielded increased CCHa2 transcript levels. This is interesting because while fructose and glucose are metabolized in the canonical glycolysis and pentose phosphate (PPP) pathways, sorbitol is neither a substrate nor metabolite in either pathway. Mechanistically, how might sorbitol mediate CCHa2 activity? From the KEGG database, the authors identified a candidate pathway through which sorbitol could influence CCHa2 expression in the polyol pathway, where glucose is catalyzed by aldose reductase (AR) to form sorbitol, which converts to fructose via sorbitol dehydrogenase (Sodh).

To validate the polyol pathway’s potential role in CCHA2 expression, the authors designed CRISPR-mediated mutants for AR and Sodh genes and analyzed transcript levels under normal feeding conditions. They observed lower CCHa2 expression for both enzyme mutants, in spite of intact glycolysis and PPP pathways, suggesting that the contribution of the polyol pathway to CCHa2 expression is both extant and significant in normal feeding conditions.

Next, the authors sought to identify whether the polyol pathway mediates CCHa2 expression through activation of Mondo. Since Mondo is a transcription factor, it needs to enter the cell nucleus in order to promote gene transcription. Imaging of a fusion protein composed of Mondo and the fluorescent protein Venus demonstrated increased nuclear localization of Mondo in wild type larvae fed glucose, sorbitol or fructose. In AR mutants, only larvae fed sorbitol or fructose showed increased Mondo localization. In Sodh mutants, only larvae fed fructose showed increased Mondo localization. In other words, substrates and metabolites in a functioning polyol pathway are sufficient to promote nuclear localization of Mondo, pointing to the pathway’s role in mediating Mondo activity.

To characterize sugar-specific epigenetic changes mediated by Mondo (and its co-transcription factor Mlx), RNAseq was performed on larvae fed polyol pathway components after the 18-hour starvation period . Transcriptional changes associated with feeding starved wild-type larvae glucose closely matched that of starved wild-type larvae fed sorbitol. These transcriptome changes were abolished when starved Sodh mutants were fed sorbitol. Moreover, feeding starved mutants fructose, the polyol pathway end-product, significantly restored changes in gene expression, suggesting that the chain of regulation for glucose-induced gene expression runs through the polyol pathway in this starvation/refeeding paradigm. Notably, many of the genes whose expression fall under polyol-pathway control have been previously identified as downstream targets of Mondo/Mlx and are relevant to metabolic processes and functions such as glycolysis, PPP, fatty acid biosynthesis, and glutamate and serine metabolism.

The authors demonstrate the primary contribution of the polyol pathway to transcription of Mondo/Mlx target genes. However, the authors also observed that starved Sodh mutants showed increased CCHa2 expression and regulation of Mondo/Mlx target genes following glucose ingestion. In other words, in a starved nutritional context, existing glycolysis and PPP pathways can act as glucose sensors. The authors posit that this is linked to starvation-induced depletion of sugar stores, causing disrupted homeostasis for sugar metabolism via glycolysis and PPP. While the polyol sensor appears to be a glucose sensor that mediates sugar-dependent gene transcription in normal feeding conditions, it may function in concert with glycolysis and pentose phosphate pathways in starved conditions.

This preprint produced important insights regarding the significance of the polyol pathway, which has been previously implicated in diseases such as diabetes and metastatic cancer. This alone suggests that this pathway function in regulating cellular uptake of nutrients, but the authors dissected its putative role even further, demonstrating how the transcriptional landscape associated with metabolism and nutrient processing is controlled by the polyol pathway. This breaks new ground in terms of application and potential translation towards diabetic retinopathy treatment and aggressive cancer metastasis. Additionally, their findings place foods containing high amounts of fructose in a renewed spotlight, potentially catalyzing progression of these diseases.

1. You were able to rule out gustatory receptor Gr43a from sugar sensing in the fat body, but to what extent do you think polyol pathway-mediated metabolic regulation may overlap with processing of sensory information from peripheral taste organs?

Glucose ingestion induced CCHa2 expression normally in Gr43a mutant larvae. Ingestion of non-nutritive sweetener, sucralose, did not induce CCHa2expression (Sano, Fly 9, 183-187, 2015). CCHa2 is predominantly expressed in the fat body, and we measured CCHa2 in whole larvae in these experiments. Thus we ruled out the involvement of the sweet taste receptor signaling in sugar sensing in the fat body, but did not rule out its function in other organs. In mammals, sweet tastes have been shown to play a role in coordinating metabolism and feeding behavior. The T1R2/T1R3 sweet taste receptor signaling promotes secretion of incretins and the expression of glucose transporter in the gut, and also promotes secretion of the hunger hormone, ghrelin, from the stomach. Therefore, it will be of interest to see the function of sweet receptor signaling in polyol pathway-mediated metabolic regulation in other fly organs.

2. Considering fructose is a ubiquitous sugar found essentially in most fruits and vegetables, what strategies would you suggest in terms of dietary intake to avoid consumption? Glucose, fructose, and sorbitol have different perceived sweetness, do you think pairing of glucose or sorbitol with low-calorie/non-metabolizable artificial sweeteners is an effective strategy against polyol-mediated harmful health effects to minimize internal fructose production? In the absence of novel pathways, it seems impossible to at once satisfy caloric requirements and eschew fructose altogether!

It has been shown that most dietary fructose is cleared in the small intestine in mice. However, high fructose spills over to the liver, which may cause metabolic diseases (Jang et al, Cell Metabolism 27, 351-361, 2018). Therefore, we need to know metabolic capacity of our small intestine for fructose. I am not sure if artificial sweeteners help as sweet taste receptor signaling affects metabolism and feeding behavior. I hope future research will unravel complicated regulatory network for nutrient sensing, metabolism, and behavior, and tell us the right meal.

Selectivity of Protein Interactions along the Aggregation Pathway of α-Synuclein