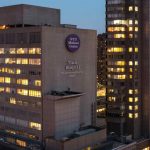 Phagocytosis (from Ancient Greek (phagein) ‘to eat’, and (kytos) ‘cell’) is the process by which cells consume foreign particles from their environment and plays an essential role in humoral immunity (Fig. 1A). Macrophages recognize invading pathogens like bacteria and viruses after they have been identified and bound by antibodies such as IgG. This binding of pathogens by IgG is called opsonization. Once macrophages encounter an antibody-opsonized target, receptors on their cell surface bind to the Fc region of the IgG antibody. When macrophages have bound to a significant number of IgG molecules, they undergo extensive morphological changes to envelop and consume the opsonized target (Fig. 1A). A big question in the field is what constitutes a significant number of IgG molecules; what are the rules for phagocytosis?

A key macrophage receptor that recognizes the Fc region is the Fc gamma receptor (FcɣR, Fig. 1B). Binding of FcɣR to Fc initiates an intracellular signaling cascade resulting in cytoskeletal and membrane protein rearrangements that facilitate phagocytosis. Previous studies have demonstrated that increased FcɣR engagement promotes phagocytosis, but the optimal spacing and density of engaged FcɣRs remains a major open question in the field. In this preprint, Kern et al. address this question with a synthetic biology approach. They make a chimeric FcɣR molecule that can bind to DNA oligonucleotide ligands and combine this approach with a new DNA origami-based method that allows them to precisely control the spacing and arrangement of these oligonucleotide ligands (Fig. 1B). This method allows them to exactly determine the optimal spacing and density of FcɣR ligands required to trigger phagocytosis.

DNA origami uses single stranded DNA and “staple oligos” to anneal a DNA template into a three-dimensional structure of precise shape and orientation. In this study the authors are able to create a rectangular DNA origami  “pegboard” onto which the oligonucleotide ligands can be arranged with nanometer precision and anchored to silica beads (Fig. 1C, 1D). The authors use these ligand-opsonized beads to engage FcɣR receptors in human macrophages in various arrangements and densities, identifying optimal receptor positioning for phagocytosis of these synthetic particles. 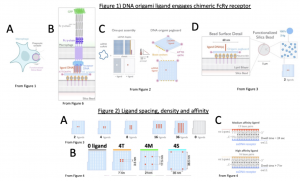 Why we chose this prelight

The use of DNA origami to precisely space DNA-FcɣR ligands is a fascinating approach to answer the important question of optimal FcɣR spacing and density. This controlled and tunable system yielded convincing data supporting a specific orientation of DNA-FcɣR ligands that is optimal for phagocytosis. Previous work has not offered such specific and fine control over the spacing of ligands making this system an exciting advancement for the future investigation of the cell-target interactions that drive phagocytosis and other signalling systems as well as having therapeutic implications for optimizing antibody spacing or chimeric antigen receptors.

Thank you for writing the prelight, and the very thoughtful comments!
Here are some of our thoughts.

Does the size of the particle itself impact phagocytosis? Would the same experiment on a smaller or larger bead yield similar results?
-Great questions! Yes, we’ve found that smaller particles are much easier for the macrophage to engulf. However, the specificity is a little less for smaller beads – small beads with no ‘Eat me’ signal are engulfed much more than large beads with no ‘Eat me’ signals (doi.org/10.7554/eLife.36688). We didnt specifically look at whether larger beads had a stronger requirement for clustered ligands. It would be an interesting future experiment!

How does the affinity for the DNA-FcɣR ligand compare to the endogenous Fc region and how might this impact phagocytosis? Have the authors consider probing the effects of using different combinations of affinity ligands to see how weak interactions may affect phagocytosis?
-This is an excellent question as well! The FcɣR is composed of an alpha chain and two gamma chains. The gamma chain mediates intracellular signal transduction, and in mice there is only one version. However there are different alpha chains and the main difference between these alpha chains is their affinity for IgG. Why has evolution given us this system – is there an advantage to combining different affinities? We don’t know but are interested! For most experiments in the paper, we used a DNA receptor that should have a similar affinity to the medium affinity endogenous alpha chains.

Do 4T origami pegboard spatial dynamics of ligand-receptor interactions recapitulate biologically relevant conformations such as those found on opsonized viruses or bacteria?
-Hm, good question! We have thought most about how our findings compare to antibodies bound to the surface of the cell (like a therapeutic antibody, or an antibody bound to an infected cell). In that case, if the antigen is mobile, the ligated Fc Receptors will coalesce into clusters. This observation was what made us think receptor clustering might be important. For immobile ligands, like on a bacteria cell wall, it would probably vary based on what antigen the antibody detects.

According to Bakalar et al. (2018), antigen height can enhance/ impair phagocytic efficiency depending on the distance between the target cell and macrophage. We noticed that the height of the ligand remained unchanged across the experiments performed – do the authors believe that changing the height would affect which spatial arrangement (4T, 4M, 4S) or which cluster size leads to preferential engulfment?
-We agree the Bakalar et al paper is beautiful! Bakalar and others have provided very strong evidence that Fc Receptor activation requires spatial segregation of receptors and the bulky phosphatases that de-activate these receptors. The space between the macrophage and target is one factor controlling phosphatase segregation. The next step in our origami project is to figure out why clustered receptors can be more potently phosphorylated. Are clusters like the 4T better able to exclude phosphatases? Its one of our hypotheses! Looking at how tall 4Ts compare to tall 4Ss might help us answer that.