Multifunctional fluorophores for live-cell imaging and affinity capture of proteins

Hello, is this the tag you’re looking for? I can see it in the cells, I can purify it on the gel… @zhanghe_goh highlights work by @prat_i_k, @JasonVevea, @rhodamine110, et al. on a “rhodamine-as-linker” strategy for multifunctional probes

Self-labelling tags are important probes in chemical biology. They react with defined ligand motifs in a specific manner and react with other functionalities to promote a wide range of applications. For instance, they can bind to fluorescent dyes (Figure 1a), enabling researchers to visualise proteins. Alternatively, these tags can also bind to affinity tags (Figure 1b), which enables researchers to purify proteins using chromatographic methods. 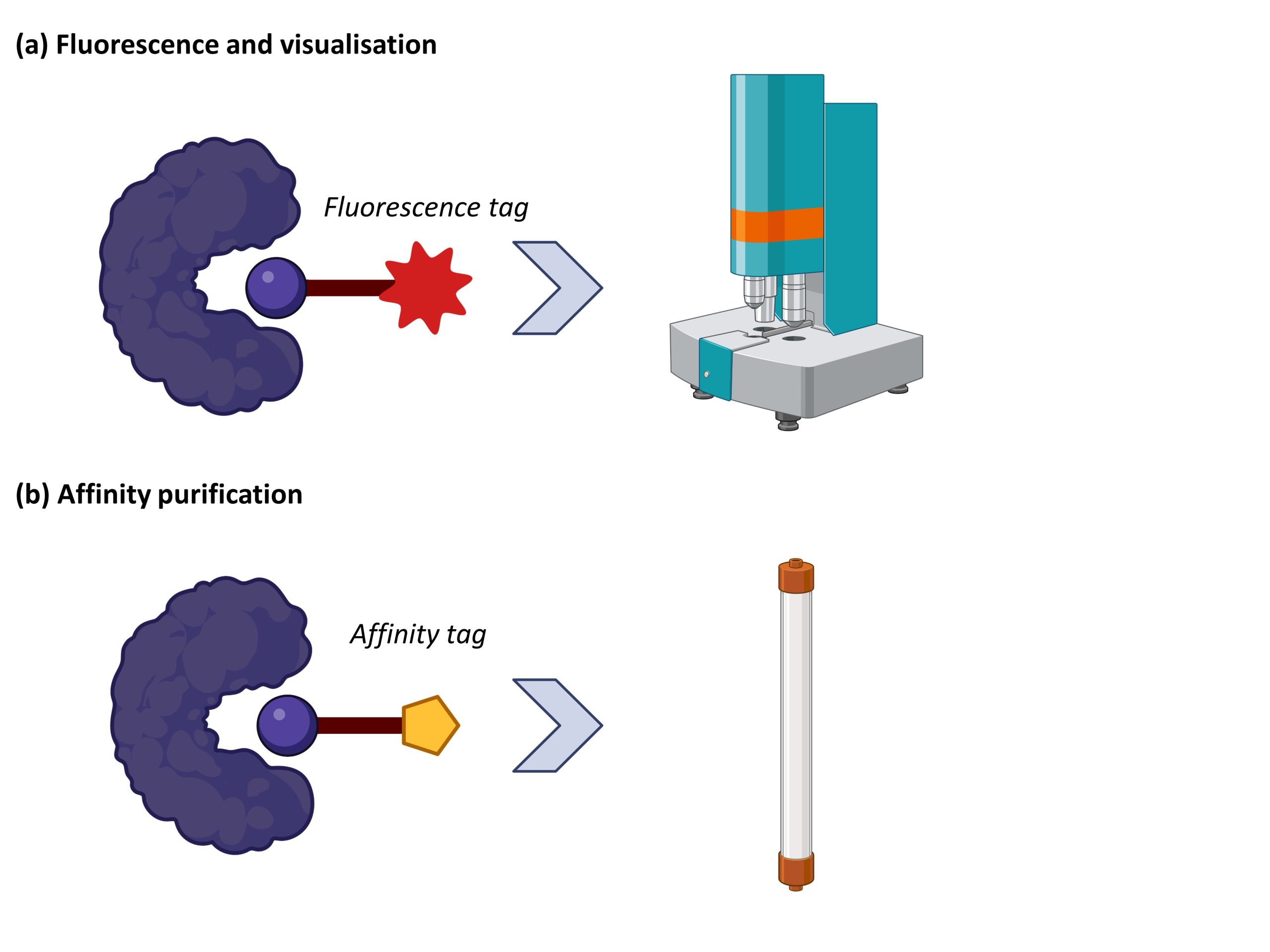 However, there are two key limitations to the self-labelling tag systems currently used by researchers. First, the ligands designed for these self-labelling tags are specific to certain applications, like visualising or purifying the protein. Second, and perhaps more importantly, these tag systems are highly optimised for their specific applications. Consequently, modifications in these tools may change important properties, such as cell permeability and labelling kinetics of the ligand. They may even alter the resulting protein conjugate significantly, but these changes are generally undesirable in cases where the protein conjugate should be as similar to the native protein as possible.

In this preprint, Kumar et al. address these limitations by creating cell-permeable probes that use the rhodamine fluorophore as a linker for self-labelling tag ligands (Figure 2). The authors hypothesised that having both the rhodamine fluorophore and the affinity reagent on the same ligand would promote rapid labelling kinetics and improve the ligand’s properties (such as cell permeability), while also enabling visualisation of these tags inside cells using fluorescence imaging. 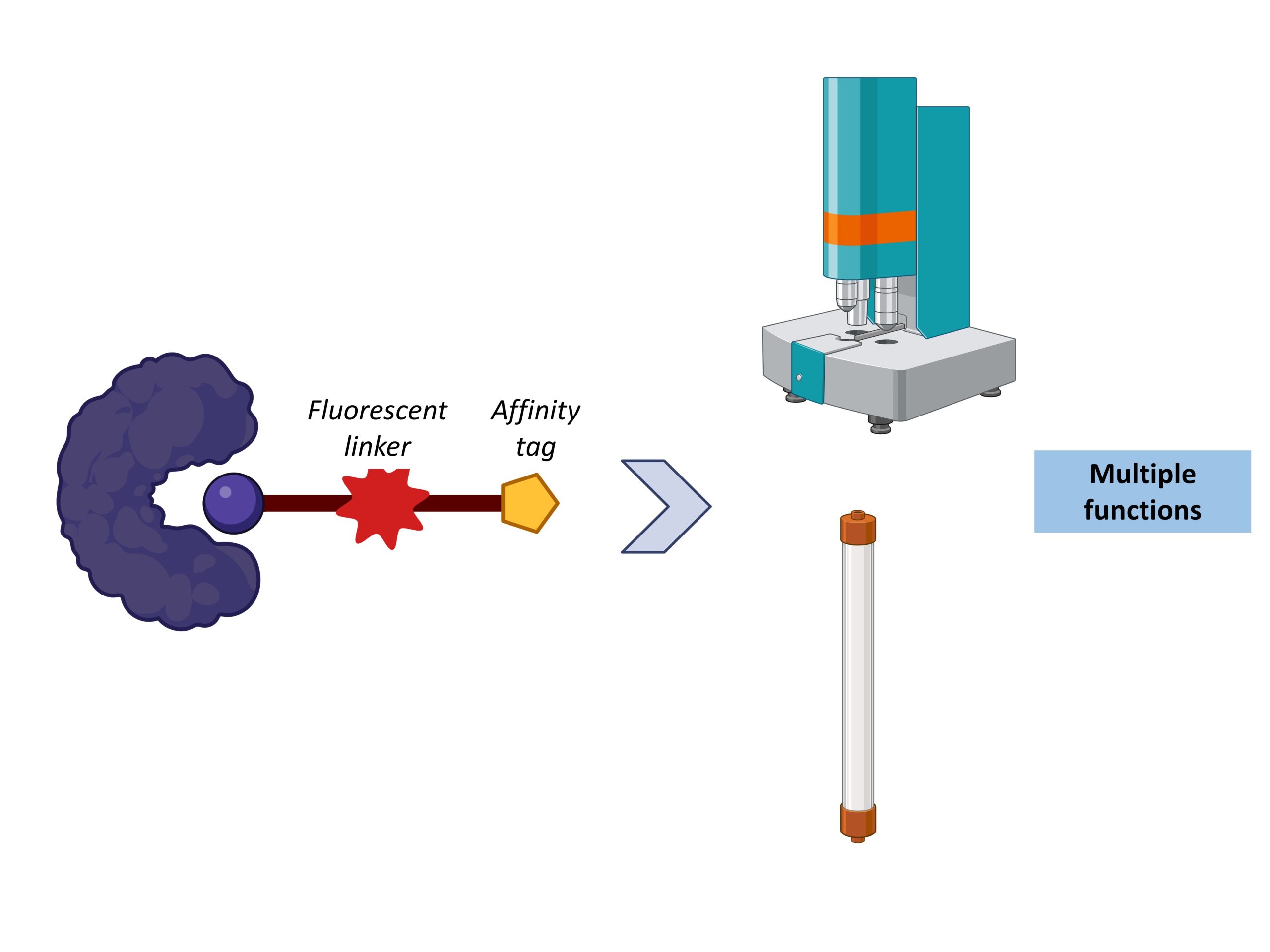 Figure 2. The combination of both the fluorescent and affinity tag functionalities into a single probe, as described in this work.

The authors first evaluated biotin-bearing HaloTag ligands, a widely used chemical probe in the biological community owing to its rapid labelling kinetics and its high cell permeability.1 Typically, HaloTag ligands consist of small molecules linked to a functional segment via a linker. The authors found that the commercial biotin-HaloTag ligand is modestly membrane permeable and was an effective label at micromolar concentrations. However, they also found that the linker was too short to allow the resultant conjugate to bind to streptavidin; streptavidin is a common reagent that captures these proteins on a purification system, so the protein needs to be able to bind to streptavidin to be purified via affinity purification. The authors reasoned that increasing the linker length would resolve this, but the resultant probes instead exhibited reduced cell permeability.

To overcome this problem, Kumar et al. constructed a series of probes incorporating both the rhodamine linker and the biotin functionality; the rhodamine linkers were selected for their cell permeability, brightness, and photostability. The activities of these probes were then compared with their analogues, which served as controls.

Finally, the authors tested the biotin conjugates of these dyes in cellular experiments. They compared the fluorescent properties of the biotin-rhodamine conjugates with their unsubstituted parent rhodamine dyes, then measured the efficiency of labelling by cell lysis and capture. The optimisation process led the authors to focus on two probes that exhibited strong signal intensities, rapid labelling kinetics, and moderate capture efficiencies.

I’m highlighting this work by Kumar et al. because it describes the authors’ strategy of “rhodamine-as-linker” in the design of multifunctional dyes. Specifically, the authors describe the synthesis of these ligands, optimising their chemical properties for imaging and demonstrating their orthogonality to subsequent affinity purification. By pursuing this strategy, it may be possible for chemists and biologists to create new ligands that could serve as probes for a greater variety of functions. This may also aid in the creation of a new generation of multifunctional ligands complementary with multiple purification methods.

A potential use of these probes lies in the study of biological targets. One of the most interesting class of biological targets to the medical community today is proteins:2 this system of probes would allow researchers to tag a protein of interest and visualise it using fluorescence to understand its intracellular localisation. Subsequently, the tagged protein could then be isolated for further studies, such as those involving its structure. These experiments would be useful for researchers to mechanistically identify relationships between these proteins’ structure and their activity. In the longer term, this knowledge would serve to inform protein design and promote the design and invention of artificial enzymes.

In fact, these probes would likely be useful beyond proteomic applications. They could also be used to understand other interesting macromolecules like DNA, and perhaps more challengingly, even RNA and lipids as well.

Furthermore, multiple tagging strategies exist beyond self-labelling tags,1 so these multifunctional probe design strategies could also be applied to these other systems. The idea of having multiple functionalities installed on the same probe could give rise to tagging systems that would potentially be orthogonal to one another, which would in turn enable researchers to probe increasingly complex biological systems.